Kehl is a pretty normal town and as we went for a walk round on Friday afternoon we were surprised to find that cigarettes are obviously a lot cheaper in Germany as the number of ‘border’ tobacco shops in town was proportionally high!  Although it did seem to have a fair number of nice cafes and restaurants and a lovely cycle path and park along the Rhine….. oh and a UFO.  Yep, randomly on the Rhine bank there was a UFO.

Although we had finally arrived in Germany we were cheating really as we only slept there, I went for a run in the morning along the German side of the Rhine and then we caught the tram back over into France to go and have a look round Strasbourg!!

The slow introduction to Germany was a relief really as I am embarrassed by my lack of knowledge of the language. Someone came up to me just before I set off on my run on Saturday morning asking how to get somewhere and I barely managed to get out ‘no spreiche Deutsche ….’ which I now know should actually be ‘Ich Spreche Kein Deutsch’ or better still – ‘Tut mir leid, Ich Spreche Kein Deutsch’ Which would be ‘I am sorry, I don’t speak German’…. best get practising if we are going to be here for a couple of weeks! 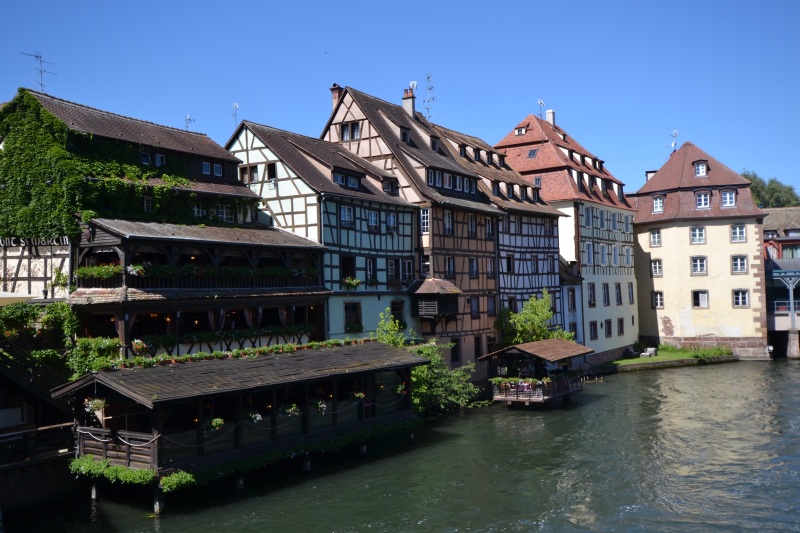 As it has been so warm, pollution levels were high (although not noticeably to us), so we benefitted from free Trams as they try to encourage people to use public transport rather than taking their cars – such a great idea, I wish they would do the same in the UK.

We were very pleasantly surprised by Strasbourg as we had thought that going in on a hot Saturday would be a bad idea but it wasn’t too busy and possibly because of all the canals and rivers, it had a lovely calm and open feel to it.

On the far side of the centre is the covered bridge (Barrage Vauban ) which you can walk up on top of and take in the views back over Strasbourg (as above), as well as walk inside and admire the gargoyle’s and statues.

The Barrage Vauban was built in the 17th Century and used to be known as ‘The Big Lock’ as each of the 13 small arches can be closed off to create a lock or a dam.  However it is now only used as a viewing platform (on top) and a museum (below) nowadays. 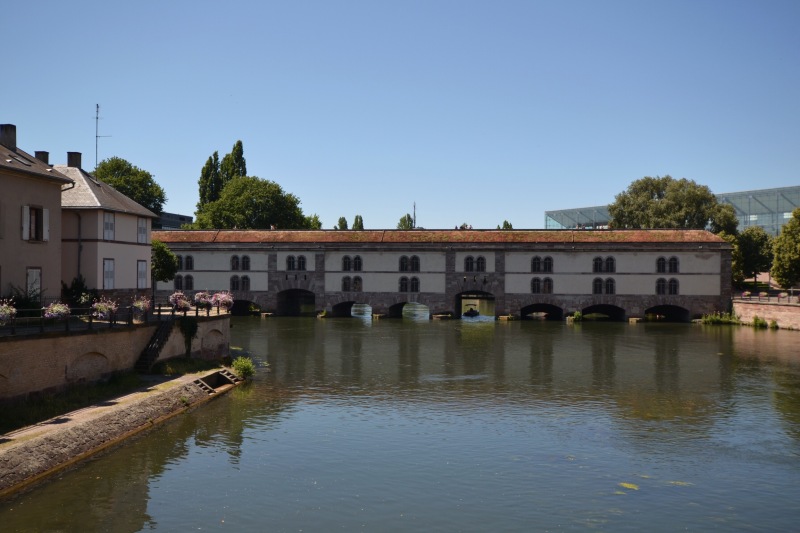 The area near the Barrage Vauban is known as Petit France and is probably the  prettiest part of Strasbourg if you like the traditional Tudor style architecture.  Although everywhere we went was lovely really…. that was possibly helped by the lovely boutique shops,  gourmet patisseries and delicatessens.  We were helped through the day by some artisanal ice cream mid afternoon whilst we had a quick rest in the shade.

As Cathedrals go, the Strasbourg Cathedral de Notre- Damme is an incredible centre piece of gothic architecture.  The photos don’t do it justice as it is only from a distance that you can see the delicate stonework to the towers that are open to the elements. 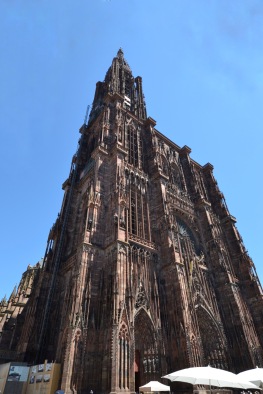 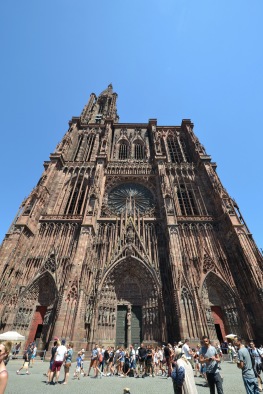 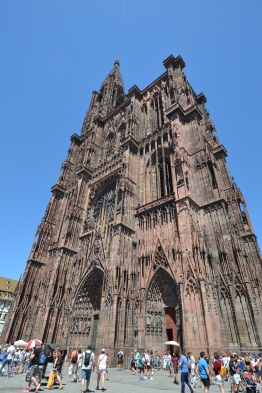 Apparently it is considered to be one of the most beautiful Cathedrals in Europe and for centuries it was the tallest building …although those days are long gone!!

Strasbourg’ed out, we jumped back on the tram and headed the 5km or so back over to Kehl in Germany to get some air flowing through Hattie.  It was a warm evening and Keith had made a Quiche so we didn’t have too much to prepare, although we weren’t expecting the entertainment that accompanied it.

At around 9pm the music started up and we were apparently benefitting from free tickets to some kind of concert which had cover bands from the 70’s, 80’s, 90’s and some 00’s who were pretty good thankfully as it carried on until 1am and there was a separate firework display at around 23:15.  What with the heat and the music not much sleep was had but it was an interesting evening!

Sunday had been forecasted to be the hottest day yet and it was 37+ degrees and unfortunately the site didn’t have much shade.  After a bit of lunch we took a walk into Baden Baden along the treelined cycle/footpath which ran alongside the Stellenplatz to be met by beautiful colonial architecture and green areas. 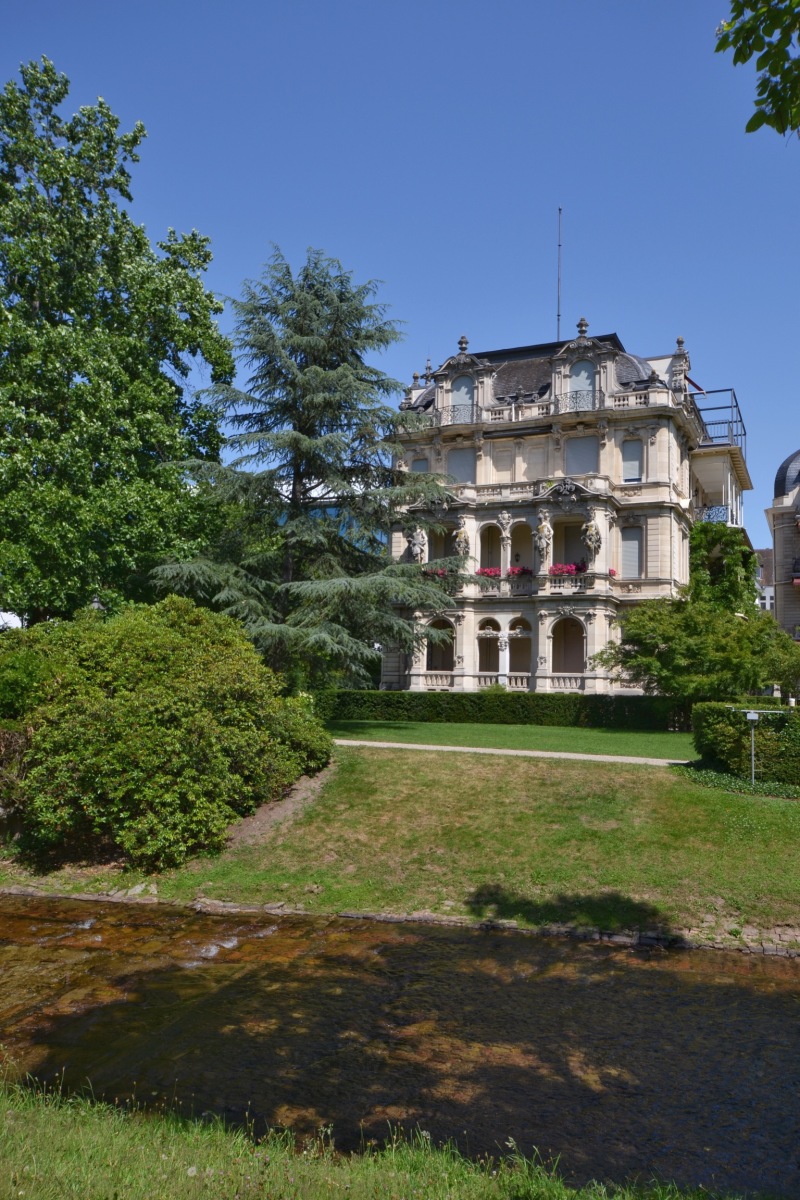 The town oozes wealth and although the majority of the very large buildings were hotels, the smaller ones like the above were still private residences.

As the town isn’t very large you quickly get to the huge park area which follows the river Oos up into the hills and on to the next town.  We just walked along the side of the river for a couple of miles but it felt like you were in the middle of nowhere, accompanied by the sound of water running alongside you as they had cleverly built steps into the river so you could hear the water flowing at all times!

On the way back, closer into the town we were surprised to see a gentleman walking his dog….. and pony – obviously something he does every afternoon, both on a lead – the dog leading and the pony dragging its hooves!

The Black Forest Gateau was light and fluffy with a biscuit base which we didn’t expect and a good balance of Kirsch soaked cherries which made it not too sweet or rich.  The Black Forest Sundae was amazing….. the warm cherries were drowning in Kirsch then covered with homemade vanilla and chocolate ice cream, a little chantilly cream (not too much), flaked chocolate and meringue to finish it off… heavenly!

Not really the kind of thing for a hot afternoon but exceptions must be made!  Needless to say that it was quite nice just to have smoked mackerel and salads for dinner as we didn’t need a huge amount!

German law mandates that kirschwasser (Kirsch liquor) must be present in the cake for it to be labelled a Schwarzwälder Kirschtorte (Black Forest Gateaux). Additionally, it is not considered to be a legal Black Forest Cake in Bavaria without the liquor from the Black Forest cherry…. it is a very serious topic!!

The weather forecast had said that from Sunday night the temperatures would start to drop, however it was probably the warmest overnight that we had had, only going down to about 27 degrees…. it was a slow run into the park in the morning for me but we both felt better after a bit of exercise and a shower to cool us down!

We noticed that there was a supermarket not too far from the Stellenplatz so ventured over to do our first German shop and we can confirm that we like Germany!!  Although we were constantly looking up words on google translate they had a great variety of produce, both fresh and otherwise …. and they even had Skyr yoghurt ….. whehey!

Keith was hoping to get some good German beer and we were both a bit confused as initially we couldn’t find anything except a few bottles of Pilsner… and then the doors opened into the Beer room!!  As expected the Germans take Beer seriously and it has its own dedicated warehouse!!

What we hadn’t completely understood however was the recycling/single/Multi usage – the Pfand system – deposit which are complicated.  Keith was opting for cans of beer as not only are they better for the motorhome but we also thought they wouldn’t have an additional fee for the receptacle…. how wrong we were.

So apparently it works like this…. Any single use drink receptacle has a 25 cent charge, any glass drinks bottle has an 8 cent charge – the higher charge is supposed to discourage people from purchasing single usage drinks – i.e. cans of Coca Cola or beer etc.  The 8 cent charge can be refunded if you take the bottles back to the store with your receipt.  Good concept, how many people actually do it is another question…. but next time we will be buying glass bottles that is for sure.  The weird thing is that they only have the tax on drinks containers and not on food???

Anyway, after sorting the shopping we hit the road and finally made it to the Concorde factory (GPS n 49.7677 e 10.5646) where there is a Stellenplatz open to all.

After parking up we popped down to the reception to check that it was ok to stay only to find that the showroom was shut until Wednesday ….. we aren’t having a huge amount of luck with our trip to Concorde!!

We had also thought that we would be able to go and look at the Phoenix motorhomes as their factory is next door but quickly realised that there wasn’t a showroom so after a quick walk round the village and a bit of lunch we jumped on the bikes and headed over to the Morello Factory (the other big motorhome builders in the area) all of 8km away.

Morello was set up by a couple of Directors who left Concorde roughly ten years ago and it is fair to say that their motorhomes are of a quality build and fairly attractive…. although we didn’t see anything that would make us change…. at the moment at least!

On Wednesday morning we finally managed to get into the Concorde showroom and we have decided that we would currently still be faithful … although they didn’t have the exact model that we liked, by looking at the front end of one and the rear of another we think we have a future potential!!  It’s all theory though as we are really happy with Hattie and aren’t thinking of making any changes for a while!!

Whilst jumping between motorhomes we met a lovely english couple (Terry and Wenda) and ended up chatting for over an hour…. always good to exchange knowledge and experiences….although even better if over a glass of wine/beer!  However, realising the time and that we had a fairly long drive ahead of us we made our excuses and set off on the road towards Koblenz.

Although the roads are excellent in Germany there is a huge amount of traffic and a higher proportion of Trucks and even though there are no speed limits on the majority of the motorways there are over taking restrictions if you weigh more than 3.5 tonnes and we ended up stuck behind slow trucks on several occasions.  This was nothing however, as when we got to Frankfurt we decided to ignore the Sat Nav… we won’t be doing that again …. and continue on said route rather than turning off and taking a road closer into Frankfurt…. it was getting close to rush hour after all….

A 4 hour journey ended up taking just under 7 hours…. there was obviously a really bad accident and the road was closed and we just sat there … moved ten meters, then sat there…. finally arriving at our Stellenplatz just outside Koblenz just before 8:30pm …. thankfully there was still a spot for us as it was pretty full!  (11 euros a night GPS n 50.309101 e 7.59798).

The Germans looked at us as though we had two heads … probably for turning up and eating so late but the temperature started to cool down a little, we had a lovely dinner with a bit of wine to ease the stress and we slept really well…. all was good!

We woke, did our exercise and took advantage of the Stellenplatz being slightly more like a campsite to do some washing before heading out for a lovely walk along the river Lahn…. we decided we will stay more than just a couple of nights! 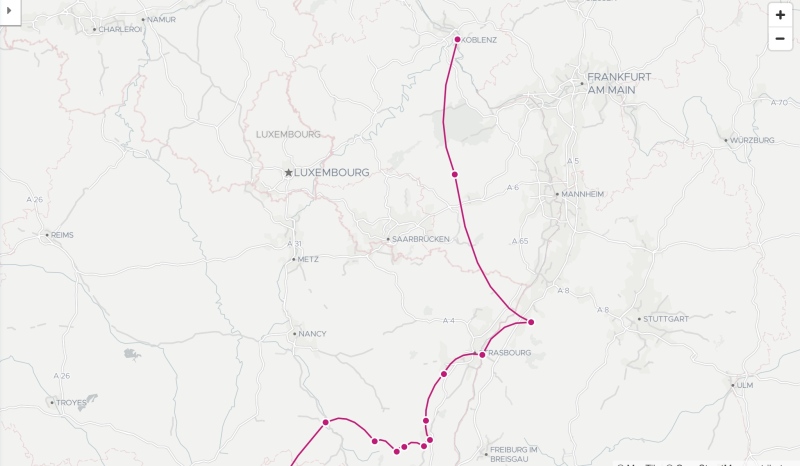