Happy New Year! and I apologise for the lack of blog for a few weeks, time has taken hold of us and I was about to publish one two weeks ago and run out of time before we jumped on a plane back to the UK …. so I am afraid you now have a condensed summary of the last four weeks as I don’t want to bore you to death …..

It was a reasonably relaxed lead up to Christmas for us, the weather was mostly dry with a couple of grey days and the temperature hovered somewhere around 14 degrees during the day (obviously feeling warmer if the sun popped out), falling to 5 or 6 degrees over night …. some may say a little fresh! Needless to say the heating was on most evenings if we were home and we even had a bit of a boost on the occasional morning whilst eating breakfast …. even I resorted back to the odd bowl of porridge in the morning to keep me warm!

We can’t complain though …. it isn’t the snow that the UK and North of Europe (and Spain to be fair) have been getting…. but I don’t plan to be going skinny dipping any time soon.

Keith has had another two rounds at the dentist, the first of which demonstrated that something wasn’t quite right with the mould as the crown didn’t fit so they did another temporary filling, then the second (Friday just before Christmas) appears to be ok. The dentist however likes to ensure you get your monies worth as he has only put in temporary cement to ensure that the crown sits correctly which means yet another trip this Friday….. hopefully to be the last. Anyone thinking that they could pop over here for cheap dental treatment would get several breaks away which I am sure would be enjoyable…. but I am not convinced that four trips for a new crown would be economically viable!

After moving the motorhome a couple of weeks ago we found that we couldn’t get the satellite to work for Spanish TV …. disaster, as although we don’t watch much TV, we were really getting into a couple of the TV series they have been showing. We tried pretty much everything to the point that our neighbours were bemused as to why the dish was going round and round in circles. Finally we gave up and the next morning Keith called up Oyster in the UK who were really helpful and advised us that Spain was in the process of changing its frequencies (i.e. where you point the satellite to) and had obviously done it earlier than expected and not told anyone …. all resolved, although the satellite dish definitely needs a bit of oiling!

We also managed to do a bit more trekking around El Campello in December trying out a few more Tapas bars in the ‘El Duelo’ challenge …. although the last time we went we only made it to two …. the tomato triple, which unfortunately looked far nicer than it tasted and the beef stew which tasted far nicer than it looked…. so you get to see the former rather than the latter which was a bit tasteless… 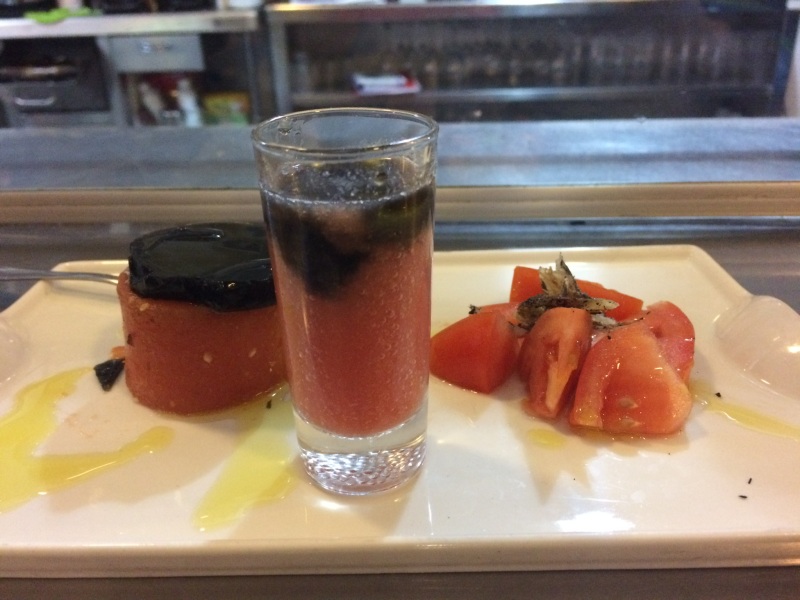 Christmas has been quiet but lovely, kicking off with prawn fajitas for lunch on Christmas Eve and in the evening enjoying posh tapas – Bellota ham, Chorizo and other cured meats, Gravaldax, Herring, Cheeses and home made focaccia. All washed down with some lovely Faustino V Rioja.  This was of course after we did our Gin taste challenge ….. a £35 bottle of Lymington Gin from the New Forest vs a 4.50 Euro bottle of Spanish Gin …..

I am ashamed to say that the result was that we could both definately taste the difference drinking the neat Gin (not something that we do very often I would like to add), however once mixed with a Fever Tree Tonic and a quarter of a lemon….. they were pretty much the same – apparently we can save our pennies going forwards!  We even broke out Settlers (board game) on Christmas Eve which Keith won 2-3 (obviously something to do with the Gin!)

Lunch on Christmas Day which was a little unconventional … although perhaps we are starting a trend now – BBQ Steak …. the sun was shining and the steak was cooked to perfection.

After a few more days of Spanish holidays we then flew back to the UK on the 29th for a few days to catch up with the family and friends, eat Christmas Cake, Dundee Cake, Mince Pies and of course Turkey sandwiches! And that is without mentioning the incredible Beef Wellington and Mojito Cheesecake that we had on New Years Eve in Bath….. It was a great few days that felt like a lot longer as we crammed so much in.  It is difficult to believe that we have already been back in Spain for a week…. where does the time go?

So, just to continue the cooking theme into the New Year and I will add to the recipes, we dug out an old recipe given to us by Dave and Nicky to make Mejillones (Moules or Mussels) 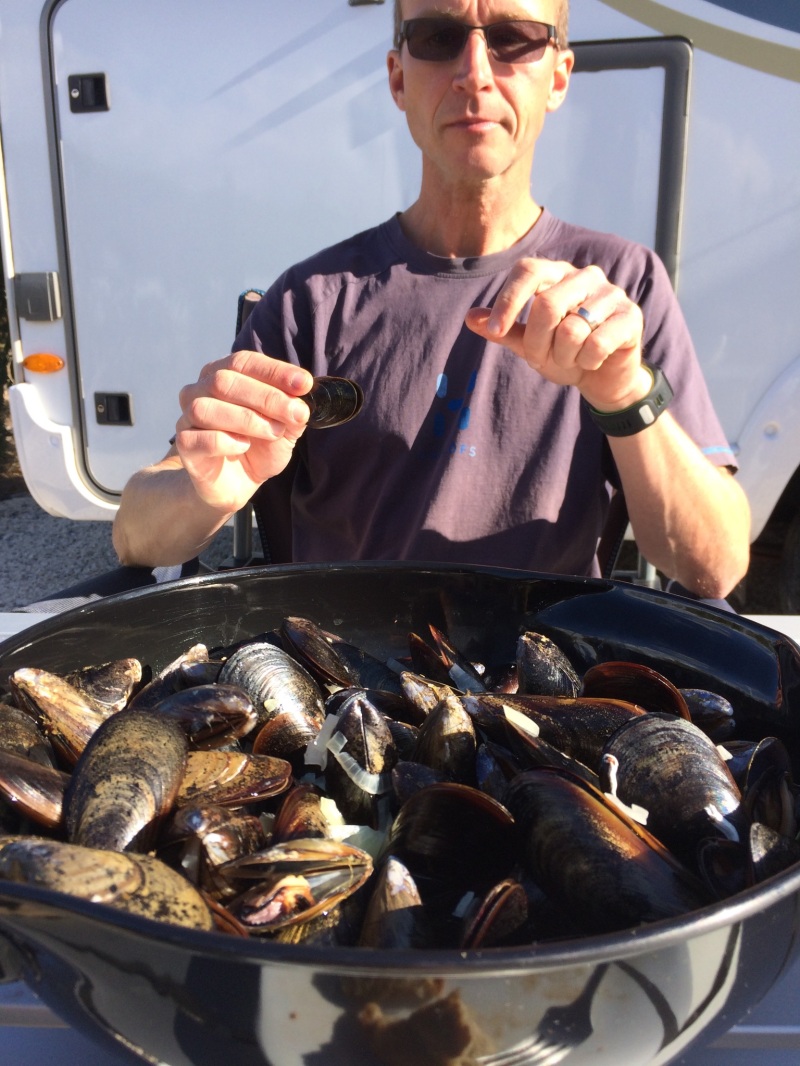 Keith has been trying his hand at making fish fingers (with Cornflakes I might add) which were really tasty, I made a mushroom and Spinach risotto that we haven’t had for ages but was delicious, we did a BBQ for our Spanish friends with copious amounts of meat and a Bakewell… although to be fair to them this time they lapped up the Avocado, Tomato and Mozzarella salad which was a pleasant surprise! We also cooked our first Lasagne in the motorhome for Miguel and Elisa which worked a treat … and Keith made a batch of Millionaires Shortbread which although the shortbread was slightly on the crispy side, it still tasted delicious!