Although a bit grey and threatening to rain we did some food shopping and then headed out along the cycle path – which was actually country lanes – for a little walk to stretch our legs while the shops were shut over lunch.  The countryside is so lush – well, they have had a lot of rain so I guess it should be – and beautiful.  You can’t see the big peaks … although the hills around Munster rise to over 1200m and Munster itself is in a valley sitting at roughly 350m altitude.  The Germanic influence on the architecture is lovely with the peaked roofed houses dotted on the sides of the hills in between the trees.

The town itself is actually quite small with one main shopping street which is made up mostly of touristy shops and eateries but there was a lovely market on Saturday morning where we managed to top up our cheese supply…. some local unpasteurised soft cheese, Munster with Cumin and a lovely strong Tomme.

The journeys are getting shorter and I think it was less than 10km between Munster and our next port of call which was Eguisheim…. another of France’ most beautiful villages. We had found a couple of France Passion vineyards but figured we were a bit too early to arrive at 11am so parked up and went for a walk into town before venturing to our overnight stop at Domaine Stoffel (GPS n 48.04431 e 7.30546). 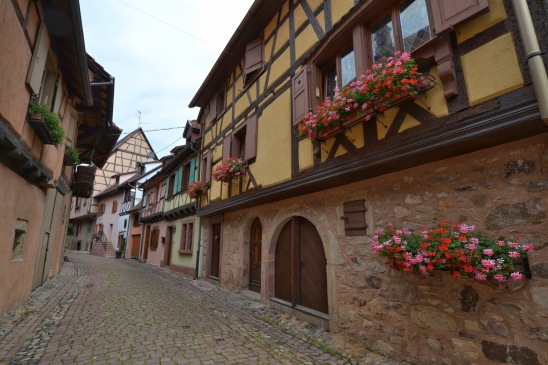 The old town is built on a circle and surrounded by vineyards rising up the side of the hills, a really lovely setting.  We were lucky as it wasn’t too busy despite it being obvious that it was a very touristy location. 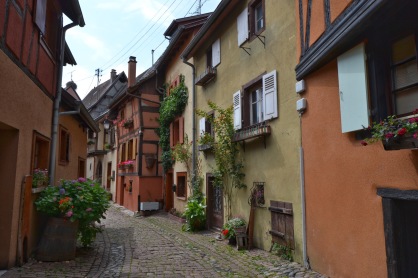 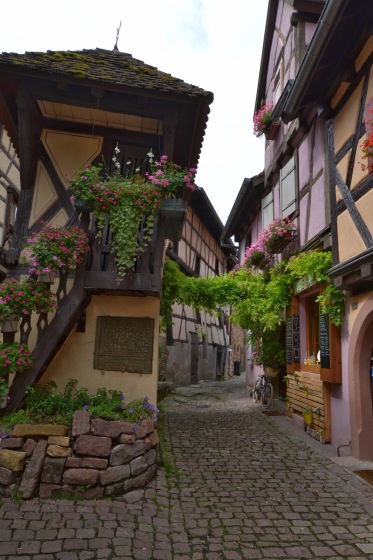 We moved the motorhome to the Vineyard just after lunch and went for a lovely walk through the vineyards before coming back to do a tasting of the wines with ‘Grandma’…. we do like these family run vineyards!  Domaine Stoffel was her vineyard that she set up with her late husband and now it is run by one of her daughters although as appears to be the way with viticulture, you never let go!

The wine from Alsace is mostly white with a little bit of Rose and some bubbles of both white and rose thrown in, although this particular place also had a Pinot Noir.  We worked our way through the menu which consisted of Pinot Blanc, Riesling, Gewürtztraminer and several others including a Pinot Noir Rose and the Pinot Noir red finally settling on a couple of bottles of Pinot Blanc as the weather is looking like it is going to be pretty warm over the next week and headed back to the motorhome for some BBQ Baked Beans and a warm but peaceful night.

Colmar is a fairly big town in comparison to the others we have visited recently with a beautiful cathedral and in our eyes….. way too many people!  Although it was a Sunday and most of the shops were closed, it was still full of tourists….and storks who in Alsace generally appear to take up residence on Church spires.

We walked through the centre and then around the perimeter of the old part which had lots of lovely green spaces and some really beautiful colonial buildings, although there was no doubt that the focus of Colmar is definitely the fishmongers district and ‘Little Venice’. 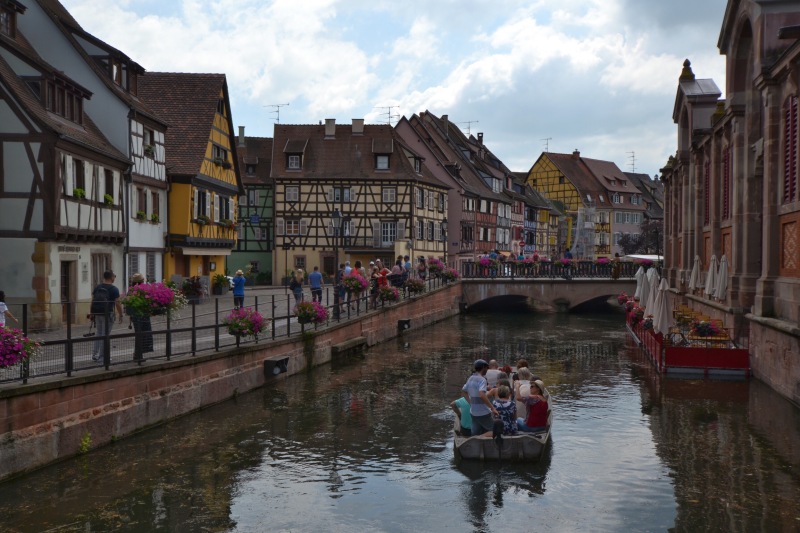 A little ‘peopled-out’ we wandered back to the motorhome where thankfully we could open everything up as it was 29 degrees and at least there was a bit of a breeze.

Windows wide open all night and the temperature dropped to all of 21 degrees …. outside.  My run and Keith’s exercise routine in the morning were pretty warm to say the least – thankfully both were mostly in the shade.

Although we keep saying we will be in Germany in the next couple of days we also keep changing our mind and seeing somewhere else interesting ….. so leaving Colmar behind us we decided to venture slightly further North in France (rather than Germany) – roughly 20km this time – to a little town called Ribeauville where we we stayed at Camping Pierre de Coubertin (13.50 euro a night).  The campsite was lovely and the pitch was shady which was a blessing considering the temperature….  I think all meals for the next few days will be outside… even thinking of getting a couple of hammocks!

Just after we arrived, our neighbours even had a visitor for lunch …. I was quite surprised as he went straight up to the table asking for food, then after they gave him some bread – although you are not supposed to feed the Storks – he wandered off round the corner to the next family eating lunch and did the same – ignoring everyone else en route who didn’t have any food….. he was on a mission!

Later in the evening he came back round with a friend …. they aren’t stupid and appear to know when dinner time is, I am sure they can read number plates as they went to the Germans, Belgiums and Dutch at around 6pm then came on to the British and French at around 7:30/8pm…. needless to say he didn’t get anything from us although he was eyeing up the Pizza on the BBQ! 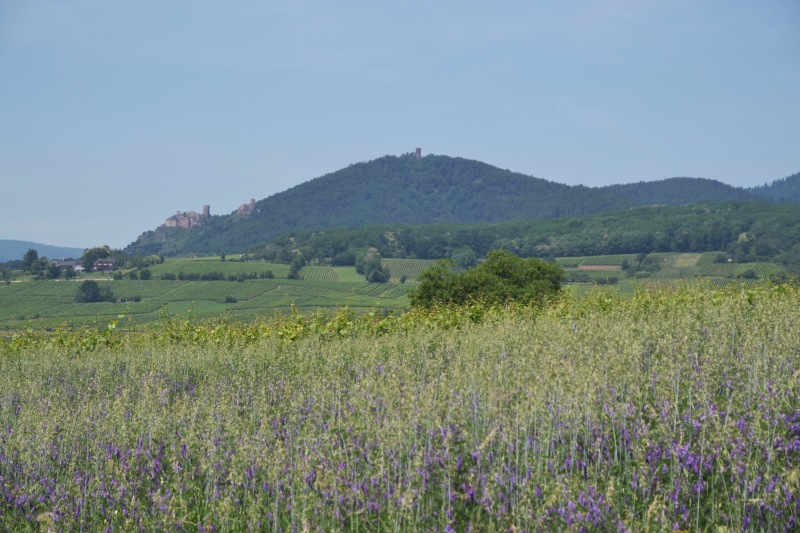 The town of Ribeuville is very pretty, probably the prettiest out of the few we have seen over this last week or so as not only does it have the beautiful buildings and quirky streets, it is also surrounded by hills lined with vineyards and topped by castles.

We decided to continue our research though and walked through the Vineyards to Bergheim, the town of the Witches just 3km away.  It was also pretty but having seen quite a few of Frances ‘most beautiful villages’ now we are getting a little picky!! 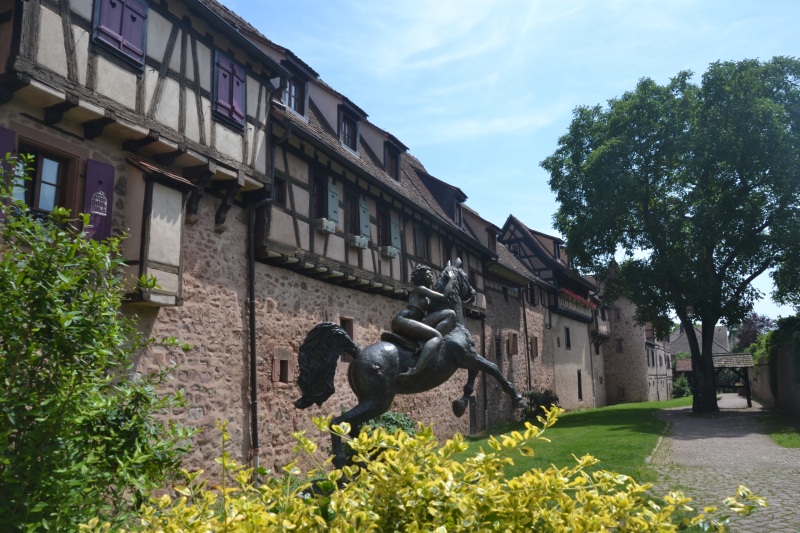 We jumped on the bikes after lunch and cycled over to Riquewihr which is also on the list… and this time I would say it was pretty much up there with the best!  Once again surrounded by hills lined with vineyards, Riquewihr is another medieval fortified town and although very touristy, it is very well kept and you cannot deny its beauty.

Not only does it have beautiful gates and towers…. naturally it also has the obligatory multi-coloured houses. 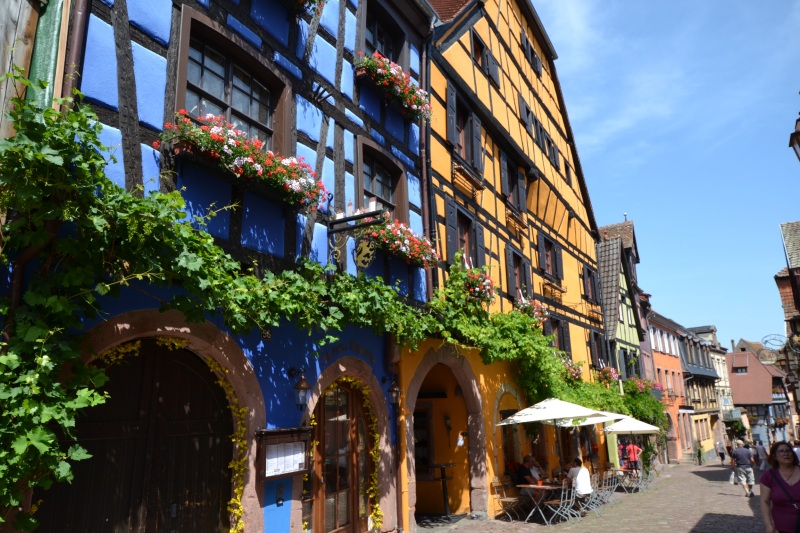 I think we have had our fill of ‘pretty villages’ for now …. generally too many people for us and not enough ‘real’ places where people actually go on a day to day basis to eat and buy produce!

So we said our goodbyes to the lovely lady who ran the campsite and headed slightly further North to Obernai where had booked ourselves a pitch – the volley ball pitch – at Camping Municipal Vallon de L’Ehn (16.20 euros a night).  I joke not but when I called to book and mentioned the size of Hattie they offered us the volley ball pitch as it was large, flat and hard standing ….. I did say we weren’t ‘that’ big and would prefer a bit of shade if possible but on arrival the volley ball pitch it was!!

The heatwave has set in and the thermometer was registering 42 degrees in the motorhome on Wednesday and although the temperature does go down over night its still very warm, even though we have been able to leave all the windows open

Obernai is a lovely little town with real shops and on Thursday mornings it has a big market which is one of the reasons we decided to venture there for a couple of nights.  The market was well worth the visit, all I can say is don’t leave it until late…. we decided to have crepes for breakfast and do some washing, getting into the market at around 11:30 and many of the stalls were in the process of packing up.  So we had a bit of a mad rush to find what we wanted but dinner on the BBQ was steak with chargrilled vegetables and a local sausage that was made from veal, spinach, cheese and some other lovely ingredients … as we had to try the local produce – it was delicious!  All washed down with the bottle of Cremant (bubbles) that we bought  in Jura a couple of weeks ago …. a nice way to celebrate a birthday!

I know it has been a long time coming but finally we have crossed over into Germany this morning.  We were a little nervous as the hot weather has pushed all the pollution levels up in the big cities but thankfully our CritAir rating of 3 was accepted (we did have a back up route), enabling us to pass through Strasbourg to get to Kelh (8 euros a night GPS n 48.563801 e 7.81395), our first Stellenplatz in Germany for a couple of nights to go and explore Strasbourg.