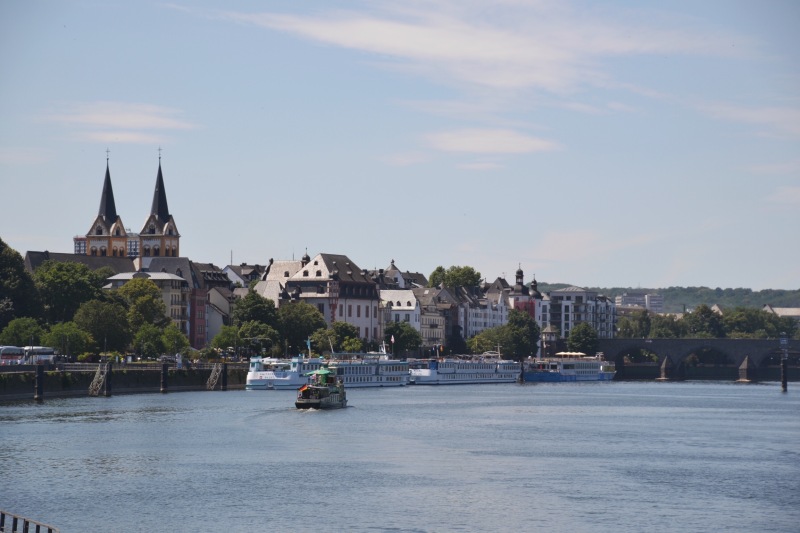 Whilst out on my run along the river I was happily admiring the scenery and saw something in the water that looked like a slightly larger than a normal duck and on second glance realised it was an otter – I am not sure I have ever seen one swimming in the wild… yes, ashamedly for those non city folk that means not in the zoo – or on TV… what a sheltered life I have lived…. I had a smile on my face all the way back to the motorhome!

Showered and breakfasted we decided to take on the German supermarket – this time it was Globus which was enormous…. far better than IKEA – you could definitely spend the whole day there and people obviously did.  There were a few men who had obviously been left by the bakery on the second floor – there were three in total – sat on benches reading a paper…. I wouldn’t mind but they weren’t having a coffee or eating anything, the cafe and restaurant were on the ground floor!

As we had planned to go into Koblenz we tried very hard to make this a reasonably quick shop but it still took us a good hour or so to extract ourselves from all the interesting cookery items and smoked meats/fish etc. 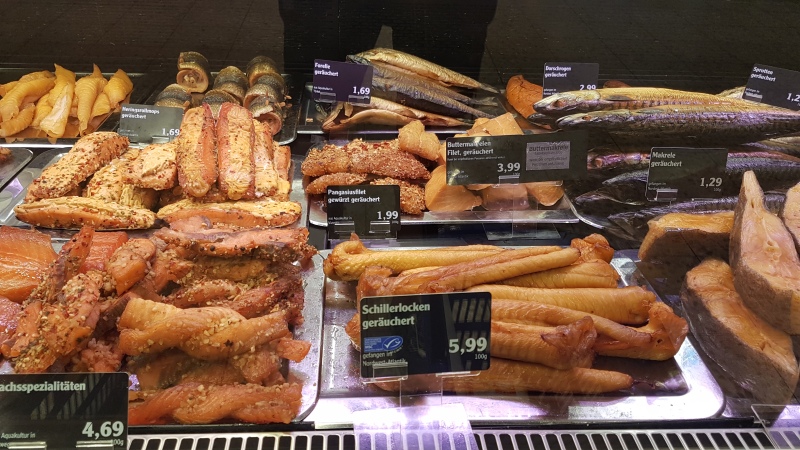 We were really impressed by the smoked fish counter and despite google not wishing to tell us what most of the types of fish were we found smoked herring, mackerel (in about eight different varieties), Salmon (again in about five different varieties) and some others …. they all looked delicious but we finally decided on a couple of different types of Mackerel and a smoked herring…. I am sure that we will find more before we leave Germany!

We finally jumped on the bikes and arrived into Koblenz just in time to have our sandwiches whilst watching the world go by.  The cycle route was roughly 8km and took us alongside the Rhine which was only 500m from the Stellenplatz – an easy ride.

Koblenz is where the Rhine joins the Mosel and as a city it is pretty normal, certainly not something you would describe as beautiful but it does have beautiful river walks, several impressively imposing government buildings in addition to an interesting little old town and a good shopping centre.  The point where the rivers join is called Deutsches Eck  ‘German Corner’ – in 1897, a monument of the German Emperor William I mounted on a 14-metre-high horse was inaugurated there and since this point is associated with the (re) foundation of the German Empire and the German refusal of any French claims to the area.

The area is known for its beautiful castles …. unfortunately Koblenz itself doesn’t even have one of those…. it has a fort instead on the opposite bank of the river! 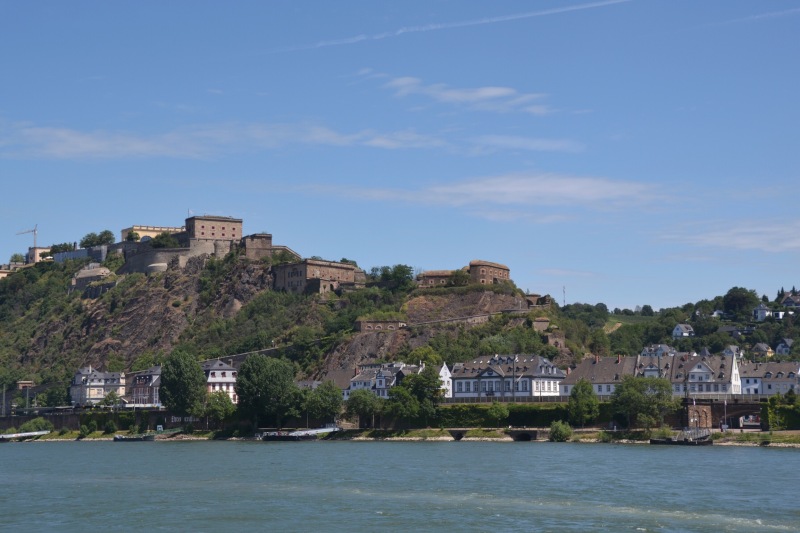 After a sit down and an ice-cream we found the bikes and headed back to the motorhome for our first taste of proper German sausages on the BBQ…. we were not disappointed, nice and meaty!

After debating whether to stay an extra day and do some more walking we decided to move on and wiggled our way up the Mosel to a little village called Ernst where we stopped at the Moselland Vinyard which has two fairly large Stellenplatz for motorhomes to stay in. (10 euros a night …. which included a 250ml bottle of Riesling wine …. GPS n 50.142628 e 7.231903)  We stopped on the circular area which was pretty much in the vineyard itself and had a walk into Cochems in the afternoon along the Mosel whilst admiring the steeply vineyard lined hills.

When we got closer to Cochems we were struck by the real Germanic Mosel beauty that everyone talks about, picturesque town on the river edge, steep hills and a fairy tale castle …. what more could you ask for? 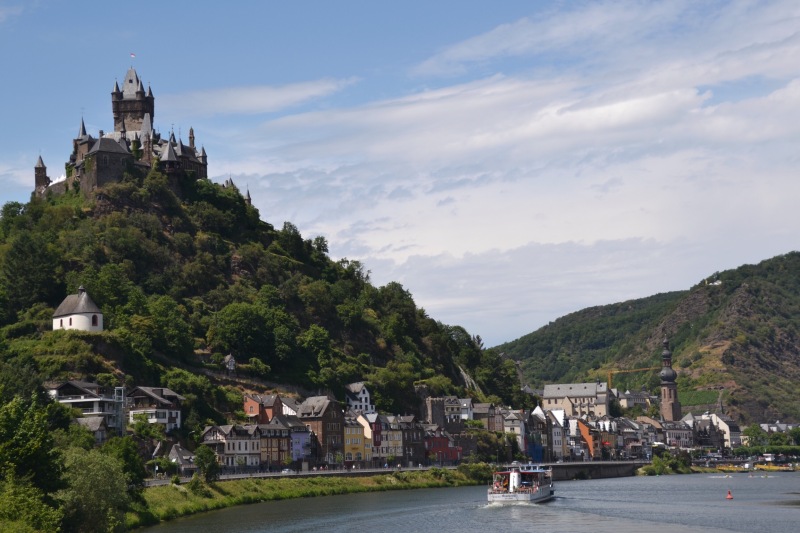 In need of a toilet and a sit down we stopped for a drink and dared to try another Black Forest Gateaux despite not being in the Black Forest… shame on us!!

The cafe was called ‘Becker’ – my maiden name – so we felt the need to try it – although we may be doing a lot of eating and drinking if we followed that method in Germany – and although the service was appalling, the gateaux was ok.  Difficult to follow on from the last one but it wasn’t bad which is probably a compliment! 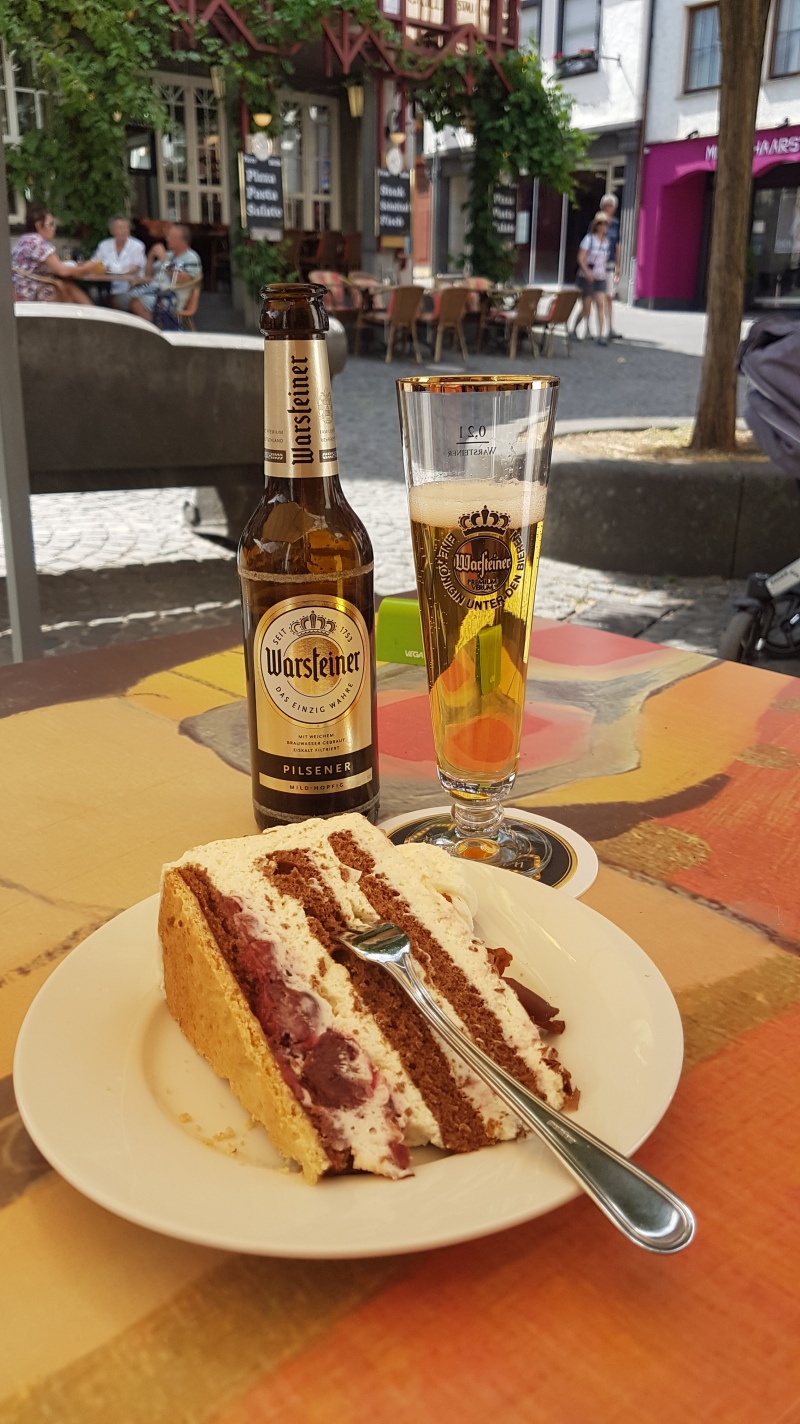 Feeling well rested – well I did say the service was slow – we finally made it back to Hattie just as it started to rain…. the heatwave was about to break!

It rained on and off all night and until about 10am on Sunday providing us with a refreshing start to the day rather than the 23 + degrees at 8am we have been used to over the last couple of weeks!

We jumped on the bikes and went in the opposite direction to Cochem up the Mosel for just under 20km which got us to Bremm.  A pretty ride taking in a few villages along the way, including Ediger which had a fire fighting competition going on and on the opposite river bank, Beilstein which was probably the prettiest village we came across on the ride,  demonstrating some of the steepest vineyards in Europe….shame the sun was in the wrong position for a decent photo! 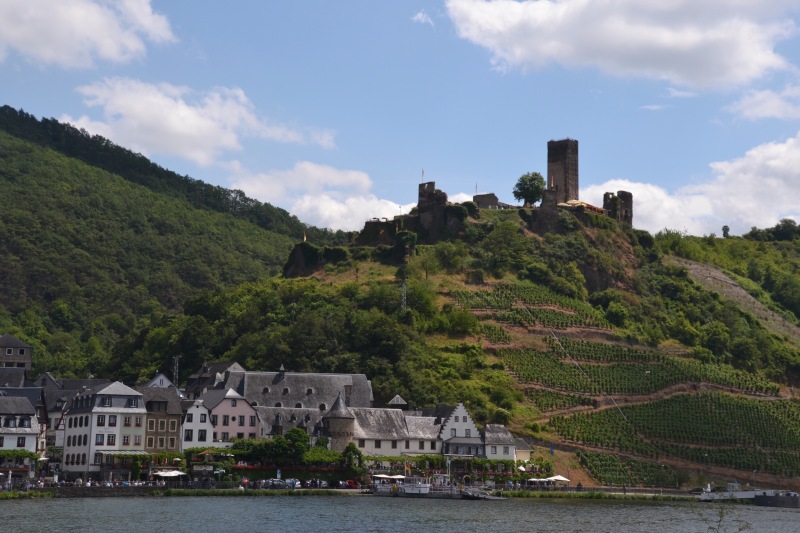 The temperature had dropped overnight finally, providing a lovely 14 degrees for a run and exercise, so feeling refreshed we set off to our next port of call Traben-Trabach (12 euros inc. elec. GPS n 49.9585 e 7.10302).

The Stellenplatz was lovely and we decided to set out for a little walk around the towns in the afternoon – Traben is on one side of the river and Trabach, the other. We were a little disappointed as they were both a little depressed and run down with many empty shops – something we haven’t seen a huge amount of to date in Germany but there was development going on in the town to create a new Spa so hopefully things will pick up soon! 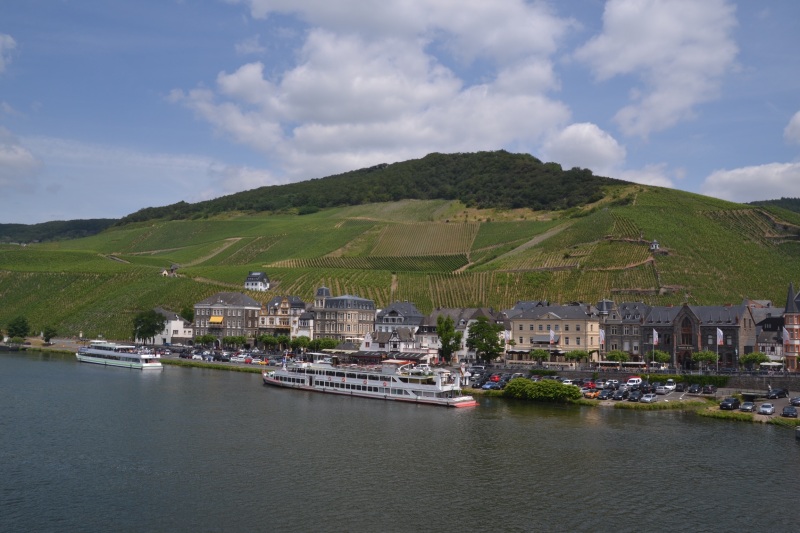 Once again we decided to stay for two nights, so on Tuesday we jumped on the bikes and rode another 22km up the Mosel to Berkanstel-Kues a much prettier town – also split by the river – unfortunately packed with tourists as all the cruises stop here. 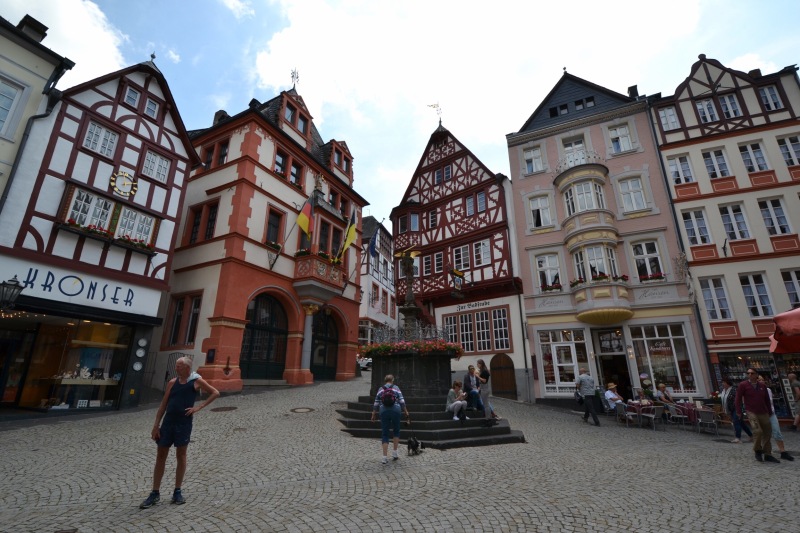 Once again, we also took advantage of the weather and the fact that we are on a site where we can do a BBQ and made pizzas when we got back in the evening.  As they say all good things come out of mistakes, this time we made the wrong quantity of dough – too little – and I think we have now perfected the thin crust pizzas!! 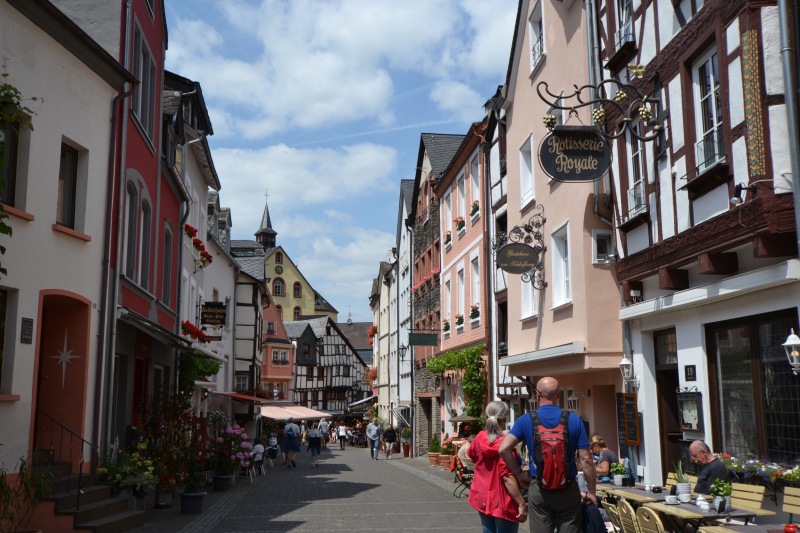 I headed out for another morning run along the river and saw no-one – not even dog walkers – which still surprises me as 8-9am is such a lovely peaceful time of the day… amazing light and so tranquil…. he ho, their loss!

Another hop along the Mosel and we got to Piesport (8 euros GPS n 49.872799 e 6.9272), another beautiful Stellenplatz on the banks of the Mosel, surrounded by vineyards. 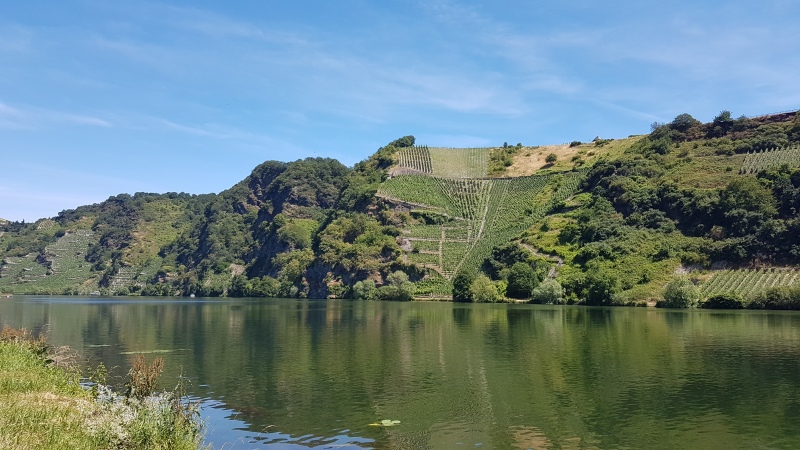 We knew we were forecast a bit of rain over the next few days so took advantage of the afternoon and headed out along the river to take in the views. This part of the Mosel is definitely one of the most beautiful parts we have visited with a silky smooth river and vineyards stretching up the sides of the hills…. 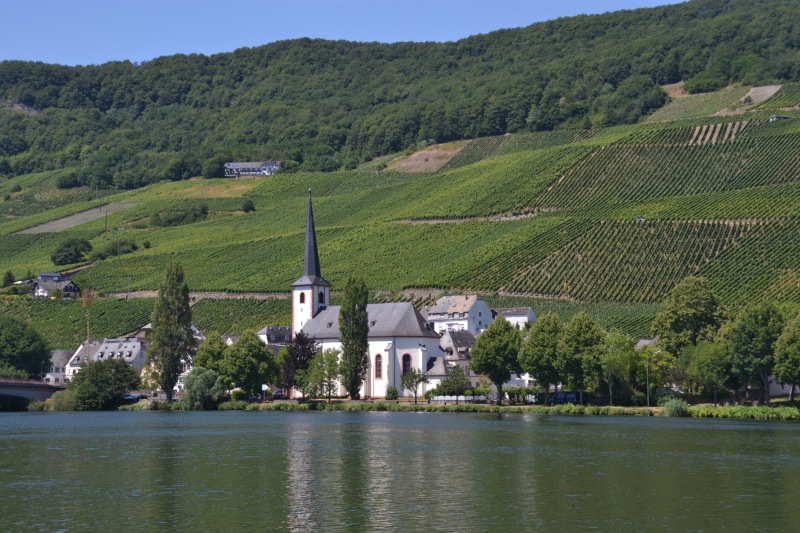 We also managed to get another sneaky BBQ in before the weather turned as we found some chicken legs and Keith did a lovely Cajun rub.

The rain arrived on Thursday at around 9am and continued on and off most of the day.  We hung around for the morning hoping it would lighten, eventually going  out after lunch in the opposite direction for a walk to stretch our legs and see a couple of the other little villages along the Mosel.  Amazingly, it stopped raining for the return journey, drying us off by the time we got back to Hattie just before the skies opened again…. all the more reason to have a lovely Chilli Con Carne for dinner…. yumm!  There is no such thing as bad weather …. it is just a good excuse to eat different food!

Piesport was our last stop in Germany this time round as we had decided to head to Metz for the weekend and more importantly – Bastille Day!

We decided to stick to the Mosel for the majority of the route despite the SatNav wanting to take us into Luxembourg! The route was pretty, especially when we got past Trier and we were travelling on the left bank of the river and Luxembourg was on the right bank.  Although Keith passed through a few years ago, I have yet to set foot in Luxembourg …. although we possibly should have gone in to fill up with fuel before we got to France as there weren’t any fuel stations on our side of the river in Germany!

We crossed back over into France after two fantastic weeks in Germany and after a bit of Deja Vu – my fault as we missed the turning – we finally got to Camping Municipal Metz (28.60 euro for a vehicle over 3.5 tonne GPS 49.125702 e 6.17068) mid afternoon and after a bit of a ‘discussion’ regarding the price, we parked up and plan to be here until Monday …. hopefully they celebrate Bastille Day in style! 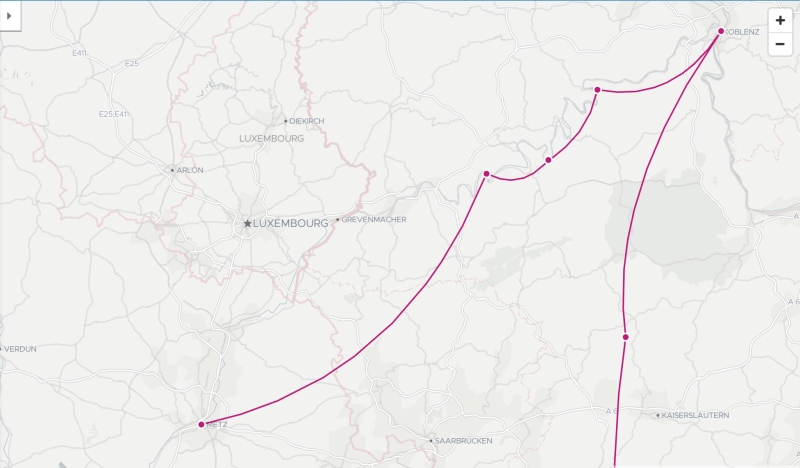