With colds nipped in the bud and the Christmas festivities well and truly over we have started to get back into a slightly more normal routine again over the last couple of weeks incorporating cycling and swimming back into the week … Although it has to be said that we haven’t actually been back in the sea since New Year’s Eve – the temperature has definitely dropped another degree or two.

The weather has been reasonable and we have been out on a couple of bike rides, one to Buzot to get us back in the saddle as such….and another up to Aigues which is slightly further.

We also ventured out with Nuria (Pilar – who runs the campsite we are staying at sister), Jaime and their two dogs into Sierra Gelada for a walk.

Translated literally, ‘Sierra Gelada’ is ‘Frozen mountain range’, however as it is only 800m at the top even on a cold day near Alicante I don’t think that it sees any of the white stuff very often. The stretch of mountain is along the coast between Benidorm and Altea, so a little bit of fresh air from the bars and chaos below.

Wanting to ensure that Christmas wasn’t just about the food and drink, Jorge and Yolanda took us up into the mountains on the 28th December for a picnic. We drove to a village near Alcoi, parked the car and walked up to Pla de la Casa which is part of the ‘Friars’ mountain. 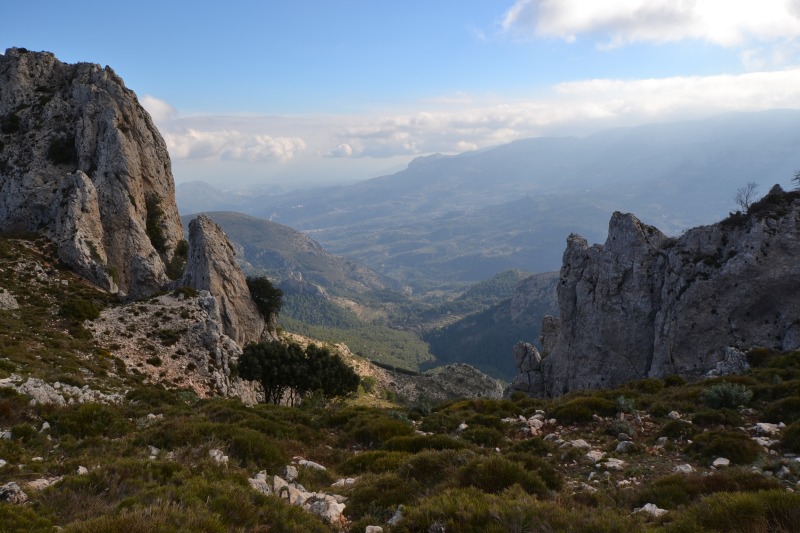 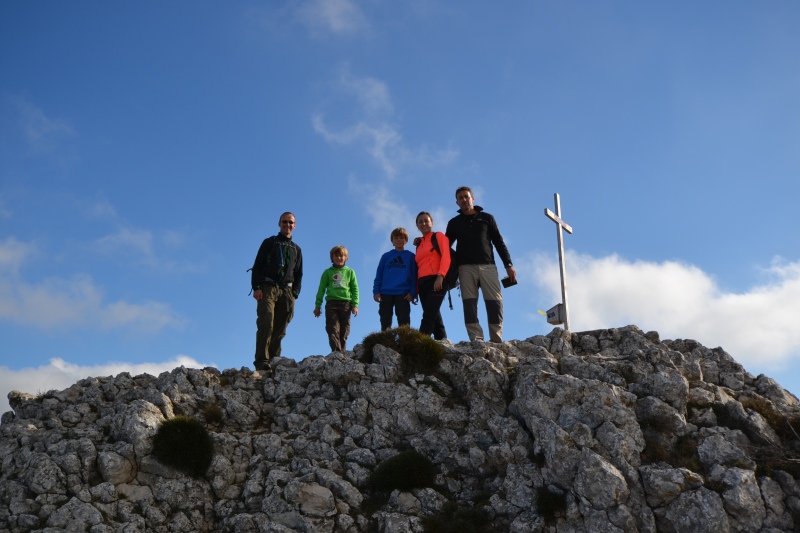 Yolanda and Jorge had left Elena (their youngest) at home, but brought Miguel (9) and Carlos (10) with for the walk and bearing in mind they probably ended up doing 25% more than us on the way down as they kept running into the woods, they did amazingly well for a 12km round trip and just under 800m climb. They did both fall asleep on the journey back which apparently is unheard of ….. strangely Yolanda and Jorge are really keen to go out on another walk soon 🙂

Neither Keith nor I have ever had big expectations for New Year’s Eve, it is just another night, but always nice to spend it with good friends and this year wasn’t a disappointment. We bought lots of lovely cured meats and cheeses, good wine, beer, some cider (and let’s not forget the twelve grapes) to toast in the New Year and headed to Santi’s flat with Manolo and Alfredo. Tradition has it in Spain that on each of the twelve strikes of mid-night you eat a grape, how they manage to do it in line with the strikes of the bell I don’t know as I ended up shovelling down six and then gave up for fear of indigestion and ate them at my own pace…… Next year I think perhaps we leave them out of the fridge so they aren’t quite so cold and possibly buy some slightly smaller grapes?????

It was a good night and the time flew by with Elisa and Miguel arriving at 00:30 and after a couple more drinks we headed out to a local bar/club … I would like to have said that we are obviously far too old for clubbing on New Year’s Eve, instead fear that we may have even brought down the average age in the first bar we went to which was a bit worrying. The music and ambience was definitely a little superior in the second venue – or perhaps that was just the effect of a long day/night.

After rolling into bed at 6am we didn’t actually think about breakfast until after 1pm when Keith cooked up a feast of pancakes (yes twice as many as normal) to help get us through to dinner….. The envy of everyone around us, although as our neighbours are from Holland and Belgium they were pretty much getting ready to eat their dinner when we were finishing them.

Having spent much of the last six weeks eating and drinking out we are now craving a bit of a detox and thankfully managed to cram in a couple of delicious home made casseroles before Alex (Keith’s nephew) and Lauren arrived on Monday for four nights.

Although we left them to see the wonderful sights of Benidorm on their own, we introduced them the festivities of the three kings arriving – Traditional Spanish Christmas for kids (Santa has only recently been introduced to Spain) – as well as taking in some of the local delicacies in San Juan, El Campello and Alicante! Alex even managed to get Keith out on the golf course to give him a good whipping 🙂

With the festivities now over – and Keith full of cold – we had one final push yesterday taking in a ‘Tardeo’ before things now start to calm down for a couple of weeks. Alicante has recently introduced the ‘Tardeo’ concept which means going out for a few drinks (and a dance) from mid-afternoon. It appears to be quite popular with all generations and makes better use of some of the bars and clubs that don’t normally open until 1am, although it was a little odd leaving a night club at 19:30….

As we were walking back along the beach this morning I decided that this was the picture to summarise the new year …….. Health, Happiness, Sunshine and a lot of core strength 🙂 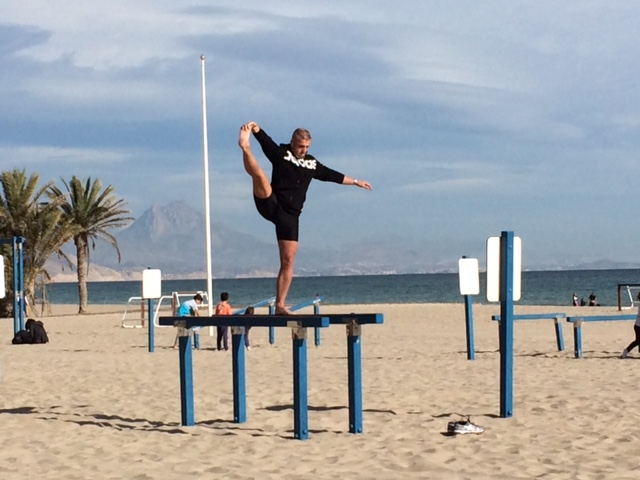 Happy New Year everyone, let’s hope it is a good one.