On route to Quiberon, we stopped off in the town of Vannes for a wander around. This has a pretty quay area and a very nice old town, well worth a stop over and a wonder around; it was a good place to stop and eat our lunch 🙂

The camping Beausejour had all the facilities that we wanted. The site was fairly busy, but then all the sites on the coast will be the same during the summer months. On the day of arrival we did think that it seemed to be lacking somewhat in the number of showers, but it turned out that what we thought was an excess of toilets was in fact 1/2 toilets and 1/2 showers. Although the site itself doesn’t have a shop or a bar, there is one of each next door. The shop is excellent and has everything in it more or less, even a fairly good bakery, though we haven’t tried the bar.

After a walk around the coast to the centre of Quiberon on the Sunday, we tried a local Brittany pastry speciality that is called ‘Kouring Amann’. It was very good, though as it was essentially pastry, butter and caramel you wouldn’t wont one of these that often 🙂

On the Monday we cycled into Carnac with the aim to have a look around the town and then see the Menhirs, Megaliths, alignments of over 1000 standing stones. These are alot smaller than those of Stone henge and not so impressive, though the fact of how they got them here 5000 years ago is. When we arrived in Carnac we realised that although we had the bike locks, Keith had forgotten the keys; we wondered briefly around the town with our bikes, though if we were going to forget the key on one day, then today was as good as any as there was not that much to see anyway. 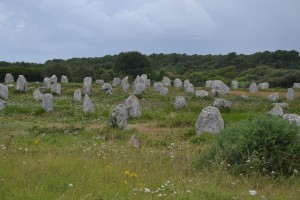 After another walk into Quiberon, which is well worth a visit as a nice seaside town, we had just got back and opened a bottle of cidre to share as an apperitif which some crips when the heavens opened. Luckily the menacing black clouds had given us warning and we had already ducked inside.