Whilst in the Motor home shop we brought a book with a number of places over Europe, the majority focused in France, that give the camping at a fixed reduced price outside of the high season. We had a review of our plan and changed from going to Jumiege to Deauville, which also happened to have a place within our newly purchased book.

Again we took the scenic route, I.e the non toll road route; we don’t travel that quickly in the motor home anyway. The route was very pleasant as were the majority of the villages/towns on the way.

The camping is a typical summer large site which has a combination of camping/motor homes as well as static homes and a large amount of facilities. It’s more than fine as it’s the closet site to the seaside co-located towns of Deauville and Trouville on the coast which we wanted to visit at some point.

The weather was definitely a lot better that the forecast had said. It was great to get the table and chairs out as well as trying out the awning… 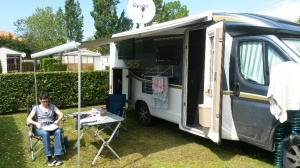 There was a very brief shower, although the skies didn’t look it would be short, whilst we were finishing off doing some exercises. Keith quickly tried to close up the chairs etc and one of the arms partly came partly off. Out came the tools and luckily it could be fixed!!! It would’ve still be usable without a problem, but for the BBQ we did that evening it was great to be sitting outside.

Deauville seems to be a rich persons seaside resort; I’m not sure if it is the race track, the yachting fraternity or the expensive cars and restaurants that lead us to this impression.  It was definitely worth a wander around, as was our walk along the very long promenade.  Deauville does have it’s twin sister Trouville on the other side of the river; this definitely caters for the rest of the population.  The fish/shellfish stalls on the key which each had a number of small tables to sell their cooked wares; it certainly looked interesting.

This time we weren’t cooking fish on the BBQ, but very tasty sausages and burgers…  Yes, and Keith does like cooking with the “Chefie” tongs.