I am afraid something that only those of you who watched children’s TV in the UK between the mid 1950’s and the 1980’s would get …. Unfortunately for us, five to five was in the morning, not the evening and it was the sound of the alarm going off and the accompanied bird song rather than a husband and wife team dressed up in school uniform ….. If you didn’t see it have a look here as it really was quite something and brings a smile to most people’s faces when the phrase is mentioned 🙂

So, yes…. 4:55 the alarm goes off, it is still dark, the birds are just waking up – noisily, it is very calming and apart from the birds, quite tranquil (unsurprisingly) and enables us to get to work for a 6am start. The hours have changed as it started to heat up last week, at 5am it is already 16/17 degrees rising to 30+ in the sun during the late afternoon, which when you are pruning the vines in the full sun it’s a bit much so we have switched to 6am – 1pm and it definitely caught up with me by the end of the week.

The last couple of weeks have just disappeared as our days have been full between work and chores. The week before last week gave us a fair bit of rain -although thankfully it was mostly overnight – finishing the week off with an amazing electric storm last Saturday, over the last week the temperature has risen but apparently it is set to change again tomorrow when the rain will start to fall again ….. Because we definitely need more rain down here……Not.

Work-wise we have now got into a routine and the work has been split between working the back breaking and knee creaking vineyards and the neck wrenching cherry trees …. Nothing a good run or a bit of Tabata hasn’t loosened up though.

We have expanded the cherry recipes to include Chocolate Fridge Cake (with fresh cherries rather than glacier) – apparently so good that the owner of the farm has made some this weekend – we have also been roasting the cherries in the oven thus removing some of the juice and find they go very well in porridge…..

Continuing our weirdness, we have now bought a French TV box so that we can watch French TV wherever we go ….. How we are going to decide which we watch when we are not in France or Spain I don’t know, but thankfully for now the French TV is going to show most of the Euro Cup so at least we don’t need to switch between French, Spanish and UK TV….. For now, at least.

It hasn’t all been work and food …. Well possibly mostly food to be fair, we have managed to explore a little further, taking advantage of the surprisingly nice weather last Sunday to walk up to Mercurol and then on a circular walk through the vineyards – beautiful. 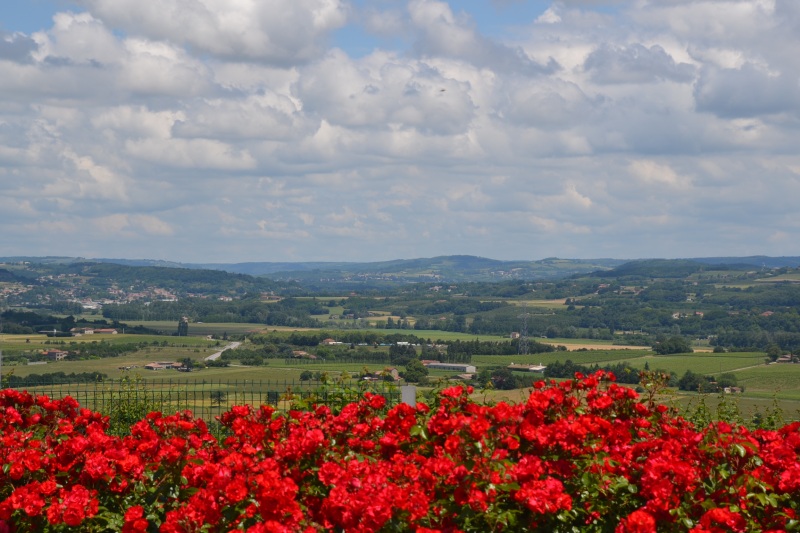 And today we cycled down the Rhone to Valence which is roughly 20km away before heading back to our favourite little chocolate shop to select some rather special chocolate for the next batch of brownies this week….. Possibly the most expensive batch we will make, but we did buy a kilo so it should last a while 🙂