We couldn’t have hoped for an easier trip home and to be honest we were a little spoilt with everyone running us around – Yolanda took us to Alicante airport on Thursday, Liz picked us up and dropped us off at the airport in the UK and Santi picked us up from Alicante on the way back….. we need to be careful as we have started to forget what public transport looks like 🙂

The families are all well and despite the weather forecast predicting a lot of rain, it was actually mostly dry for the four days during daylight hours…. not that there was much daylight – it was a bit of a shock to the system when it got dark before 4pm as we have been used to an additional couple of hours of daylight each day.

To make the most out of the four days back home we alternated between the Anderson and Becker residences…. a food plan executed with military precision.

Thursday afternoon consisted of Ginger muffins with a buttercream top for tea, followed by Short ribs with the meat falling off of the bone and a rhubarb crumble for dinner. Friday started with a traditional Becker family picnic lunch which incorporated pickled herring, smoked salmon and fish balls along with all the other meats, cheeses and breads you could hope for and was followed up with viennas (a kosher version of frankfurter) and a rhubarb and apple crumble for dinner…..something we never mind repeating 🙂
Saturday was Christmas day with the Andersons which consisted of all things that should belong in Christmas dinner (turkey, brussel sprouts…. although Liz had bought the flowering variety which although very tasty, they were more purple sprouting broccoli like, roast potatoes, parsnips) and no less than the usual three deserts …. Christmas pud, lemon flan and a ridiculously large chocolate ice cream dessert… 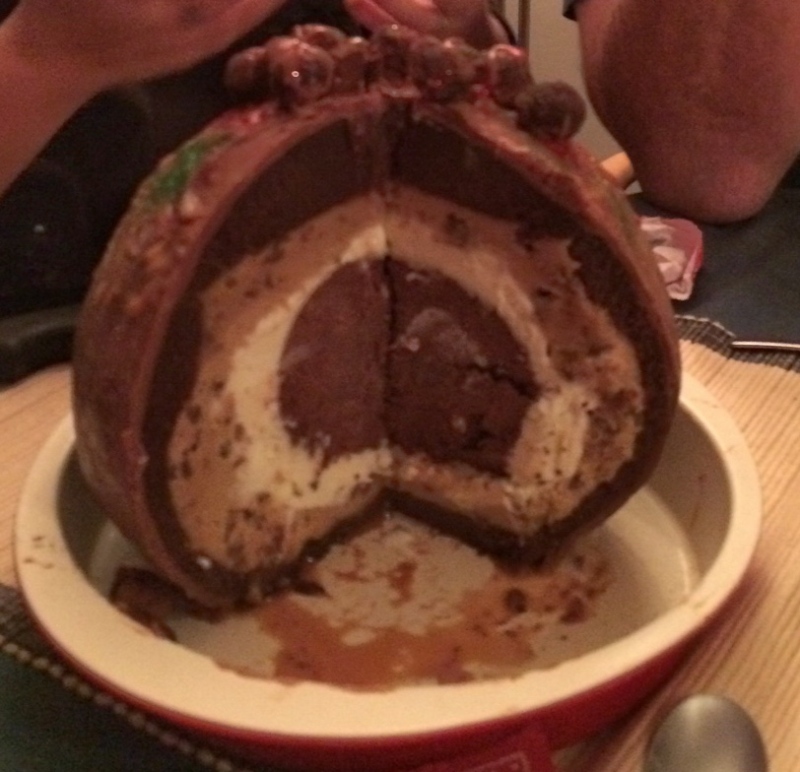 The size (and weight) of a bowling ball, the dessert was chocolate truffle in the centre surrounded by vanilla ice cream, encapsulated in a thick layer of cookie dough which was then smothered in a thick layer of chocolate fudge cake, all held together by a coating of cadburys milk chocolate…. And if that wasn’t enough, topped off with some chocolate truffles – a chocoholics dream, definately to be repeated, but perhaps it could be a little smaller next time 🙂

Hats off to Paul and Carly as following some plotting between Steve and Carly, they created a monster…..

Sunday was slightly more civilised on the food front with a lovely roast dinner in the local pub followed by a nice slice of home made Almond tart.

It is fair to say that although we didn’t get our expected fill of mince pies and christmas cake, we ate very well. I am not sure who told the rest of Europe that the Brits can’t cook, but I can assure you that in our families case, they were wrong!

The four days back home passed far too quickly and before we knew it, it was 5am on Monday morning and we were getting ready to drive back to Gatwick….. Back to Alicante to enjoy some tapas and Canas 🙂

The town closest to us along the coast is holding their ‘Duel of the Tapas’ competition throughout December so as Monday and Tuesday were holidays locally, we went to investigate with Santi, Miguel and Manolo.

We only managed to make it through three places on Monday as the second was very slow, but two out of the three were impressive…..

not bad for 2euro 50 with a glass of wine or a beer. There are 17 bars/restaurants competing in total so the challenge is on and we will try and get through them all by the end of the month 🙂