We said our goodbyes to Michelle and Ulf who are in the process of having their new home built on the back of an ex-Austrian army vehicle and headed further south into an incredible electrical storm, almost to the tip of the heal to spend the night and dine at another Fattore Amico place ‘Agriculture MATINE di Anna Coppola’ near Alessano. Anna didn’t speak any english, but we managed to get by and found that her family had owned the small ‘chambre de hote’ on the land for 50+ years. It had definitely had a few updates during that period as it was authentically rustic, but also quite nice with a lovely pool out the back!

Dinner was typical Salerno food with a pretty impressive Anti-Pasti which just kept on coming followed by pasta with kale, meatballs with salad???? – a new one for me, but it was definitely lighter than the potatoes which were the alternative option – and thankfully only Strawberries and Ice Cream for dessert as I was struggling to cram them in. All washed down with some local wine and a digestif to follow…..tasty and worth the stop.

The following morning, we moved up the coast a bit further to Torre Del Orso (Camping Sentinella – 16 euros inc elec. with ACSI) where the beaches were white sand, the sea turquoise and there were lots of rock formations and caves along the coast. It is still very much pre-season although we were pleasantly surprised to see that the swimming pool was open and a good 25m long…. More than could be said for the town itself as it was also roughly 25m long (I exaggerate slightly) and pretty much everything (except 3 delis and a couple of bars) was still shut – the butchers actually had a note up outside to say that it would be opening on Saturday. So, no Bar B Q for us, but we did manage to buy some nice cheeses and meats from one of the deli’s.

We cycled into Otranto on Thursday which despite the road signs wavering between 16km and 11km at the beginning (it ended up being 17.5km each way), and not being able to judge how far 2kms actually is (definitely more like 5km)…. has a beautifully maintained historic walled town and is the most Easterly point of Italy – I think we heard more English and French voices in Otranto than we have heard since Florence …

We had hoped to cycle to Lecce on Friday, but as we were forecasted rain and the signposts said it was 22km …. Which if the trip to Otranto was anything to go by meant more like 30km, we decided to drive closer and stay the night to have a look around.

Unfortunately, when we arrived at the Aire in Lecce there was no sign of it being any more than a house and the gate was shut so faced without anywhere to stay, we decided to drive in a bit closer and have a walk around Lecce, but continue the journey to Alberobello later in the afternoon. 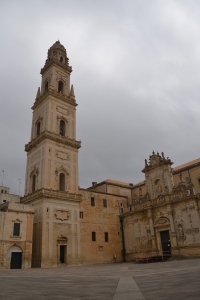 Lecce is the capital of the province and also a University town and what we saw of it on our whistlestop tour was really nice although they are currently renovating everything (the wall, the castle, the theatre, the cathedral….) in the hope that they win the 2019 European City of Culture – so photos were a bit limited. It is the kind of place that we would have liked to explore a bit further as it looked like it had a lot to offer, just a shame that we couldn’t find anywhere to stay closeby.

We finally parked up for the night in Alberobello (‘Parcheggio nel verde’ 18 euros inc. elec.) and settled in to a quiet evening. Alberobello and the surrounding area is known for its ‘Tulli’ houses, which are slightly odd looking with cone shaped roofs made without any mortar.

Despite planning to stay a couple of nights, after a couple of hours walking round in the morning we decided that we would move on. As appears to be the way the last couple of days we lucked out – both places we had highlighted as potentials looked a bit grim, so after a quick review of options we decided that we would head to the next place we had planned to stay (albeit in a few days time) which was another Fattore Amico farm ‘Monte Sacro di Libera Bitondi’ near Mattinata. It was a long days driving for us, made even longer by a road being closed which meant we probably drove an extra 30km up the side of a mountain to get to the farm…. But it was worth it!! 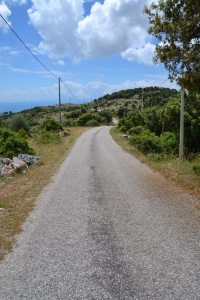 Located 700m up and just over 10km outside Mattinata, Monte Sacro is in a national park and there were points when we were driving up the single track road when we thought someone was having a laugh as there were only hills, trees and cows to be seen. However we persevered and finally got to the farm and parked Mika in a field with three rather beautiful donkeys…. One of them being a baby.

We felt a little extravagant eating out twice in a week …. but are very glad we did – everything (except the wine) was home grown/reared and the men of the house were in charge of the kitchen providing good portions of a fantastic selection of food.

The Anti-pasti included marinated aubergines, aubergine stuffed with sun dried tomato, bruschetta, deep fried artichoke stuffed with mozerella, ricotta, mozerella and surprisingly (when you hear what is in it) the most flavoursome dish was a dish layered with sardines, cheese, baked corgette and breadcrumbs…. It really shouldn’t have worked, but definitely did!

The Anti-Pasti was a meal in itself, but it was followed by the most delicious spaghetti in a tomato and Parmesan sauce, a mixed (succulent lamb and beef with sausages) grill cooked on a bar b q with potatoes and then finally when I was going to pop they turned up with a small jam jar. I almost gave it to Keith without opening it I was so full, but thankfully after a little breather (and seeing Keith’s eye’s light up when he took the first mouthful of his) I dipped my spoon into the most incredible Tiramasu I have ever tasted. We both agreed that we haven’t ever tasted anything like it, perhaps it was because it was made with home made ricotta, perhaps it was the balance of coffee, liquor and cheese – who knows, but we would happily get fat on that 🙂

As the place was so tranquil we asked if we could stay a second night (normally you only stay one night with Fattore Amico as they have another business that they are running) and they were happy for us to do so. So, in the morning we decided to walk down through the national park into Mattinata to take in the views, we were grateful that we managed to miss the majority of the electric storms that passed through the area during the day especially on the rather steep 700m trek back up.

This morning we said good bye to the donkeys (and the owners, naturally), although I did try and convince Keith that we could get the little one in the garage :), and headed back down the mountain taking the slightly quicker route this time and wiggled our way along the coastal road to Viestra (‘Camping Bahia Degli Aranci’ 16 euros inc Elec. with ACSI) where we have now stopped for a couple of nights. The area is mostly national park and very rugged and beautiful, complimented with lots of caves along the coastline so we hope to get some good walking and cycling in over the next few days.