A couple of people had mentioned Toledo to us and reading up on the history it sounded like an interesting place to visit, so despite not originally planning to venture this far inland as we have a week or so to explore slightly further afield we thought we would pay it a visit.

Looking at the options for parking we found a campsite that sounded below average with an above average price, but after looking on the ‘Aire’ website we found that we were able to stay overnight in the car park opposite the bus station, there weren’t any facilities but it suited us perfectly for a night or two.

Toledo was hovering above us on the hill top, with the river snaking around it like a moat, protected by a beautifully restored wall and each entry point by double gates.

Despite the beautifully restored castle (now a youth hostel) on the opposite hill top and dramatic countryside around it, the town itself still shone brighter with so many beautiful buildings and warren-like roads twisting through the old town. Watching some of the cars driving through the streets made us wonder how they even got there in the first place … a little like when someone dislocates their shoulder to get out of a strait-jacket … there must be a trick in there somewhere. 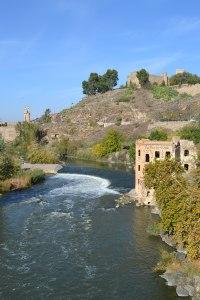 Toledo is apparently well known for making marzipan biscuits, swords, knives and historically being one of the first cities where Jews, Muslims and Christians lived together alongside each other dating back to the 11th century. There is still evidence of a large Jewish presence with several synagogues in the Jewish quarter, although as with most Spanish towns there was a church, cathedral or monastery on every other corner …. The church is responsible for making a large percentage of the marzipan biscuits which help feed (excuse the pun) the tourist industry …. I am sure there is something wrong with selling sweets to children (ok, and adults) for the benefit of the church, but I will leave it at that…

The cathedral is however impressive – unfortunately the sun had started to close in on us on Wednesday and they were preparing for filming on Thursday …. So the photos aren’t quite as good as I would have hoped…

We arrived at the ‘Aire’ which is about 500m outside the town centre and were thankful we arrived when we did as we got one of the last two spaces and as the afternoon/evening went on more and more motorhomes came and either parked round the corner on a bus stand, or disappeared off into the wilderness.

The Aire is situated on a municipal park / sports area, so Friday night, being Halloween we had lots of curious kids pop their heads round for ‘truc o trato’ Trick or Treat. They were very friendly and after we had disposed of all of our child friendly reserves they were polite enough when we said we didn’t have anything else and disappeared.

Whereas Toledo is pristine and well renovated, Caceres feels a little more like a real town – although, walking through the old walled city it still feels like it has been put up for a show and no-one actually lives there. 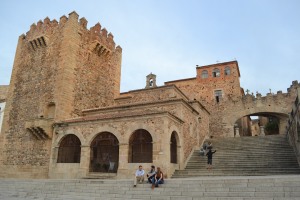 Although the Aire says you can only stay 24 hours, we decided to move the motorhome to do a different spot, hoping that as 1st November is a National Holiday no-one will come round and we can spend a bit more time wandering around Caceres and try out some tapas bars tonight 🙂 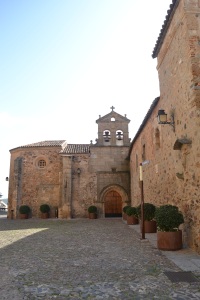 For those of you who are curious ….