Following a lovely evening enjoying red wine and chocolate with Bill and Angela who have also recently set out for an unknown period of time travelling in their motorhome, we headed to Saint Emilion for our next wine tasting experience….

As we were approaching the Saint Emilion we found ourselves in familiar landscape again with vinyards spreading across the horizon. We parked the motorhome just outside the town and walked up (restricted by a 2 meter width barrier …. we weren’t going to get through there, even on a good day Mikas’ hips are larger than that).  St Emilion is a walled town built on the side of a hill, which was recently made a UNESCO site – it is beautiful. 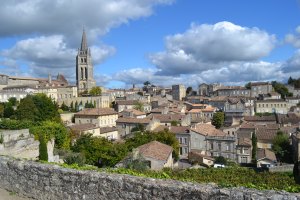 After exploring the town we decided to take one of their suggested walks through the vinyards. Now, I am not sure if the directions were lost in translation (my translation that was) or their signposting was a little under par, but there were definitely parts where a lack of detail helped explain why 11km were going to take us 3 hours 😦  That said, when we worked out where we were going (and increased my French vocabulary) it was a lovely walk.

Evidently you are no-one (and definitely not a reputable wine producer) if you don’t have a chateau in Saint Emilion…. I have to be honest that I was a little disappointed when some of the so called ‘Chateaux’ turned out to be large steel framed warehouses (albeit in the middle of a vineyard) …… I would be suing the estate agent for miss-representation if I were them…

We were staying the night in the grounds of Chateau de Rol – which unfortunately isn’t a Chateau, but a bit more of a farmhouse – however when it came to the wine and hospitality we weren’t disappointed. We were taken in to the big farmhouse kitchen by granny and gramps and told that we would be trying four different wines – little did we realise that once we started talking we would also get an excellent conversation class in French focussing on grape 🙂

I was curious to understand why the wine in Saint Emilion is so much more expensive than the Bordeaux (which they also produce) and they explained that Saint Emilion is now fully developed as a region and as the wine is popular world-wide the price will only go up as they can’t produce any more than they already have. Bordeaux however is an enormous region and many new vinyards have appeared over the last 10 years or so, flooding the market with wine (what a great thought …) therefore Supply > Demand …. thus reducing the price…. obvious really – although I was expecting him to tell us that the grape/process is far superior – apparently not the case.

Granny and Gramps were mid to late 80’s and the vinyards were passed to them through the generations and they have now passed them on to their son and daughter …. however the grandchildren aren’t interested in continuing the family line. They have 30 Hectares of vineyard most of which is Saint Emilion vine …. each hectare is currently worth in excess of 1 million euros…. I told them not to worry too much about the grand children and to take a nice holiday and enjoy it …they were a lovely couple and I think they liked us as they let us taste this years’ wine which hasn’t yet been pressed (interesting in itself) and he gave us an extra bottle of wine 🙂

After a good nights’ sleep we left the vineyard with our wine stock full and headed on to Bordeaux.

We picked Village du Lac Campsite (16 euros inclusive of electricity) which is about 8km’s (on a cycle path) outside Bordeaux and guess what …. on a lake. It is a large site, but nicely arranged so it feels quite woody and tranquil, although by late afternoon/early evening it was full.

As the weather has been predicted to be a bit random over the next couple of days with showers forecasted, we decided to try and make the most of the dry patch we had after lunch and headed in to Bordeaux on the bikes to have a look round.

As with any large city over the years the surrounding villages/smaller towns join together to extend the main town further…. Bordeaux pretty much extends out to the lake and campsite where we are staying – but there is something about Bordeaux that makes it feel like a (very) large friendly village. We only spent a couple of hours walking around on Monday afternoon as it started to rain, but headed back in on Tuesday to walk around the rest and once again (sorry to be a bit dull), it has a lovely relaxed feel to it. We quickly managed to leave the central commercial areas and enter ‘student ville’, and then as quickly we arrived in ‘North Africa’ and several other continents soon after – A multi-cultural city that to us certainly seems to fit together seamlessly (where some in France definitely don’t) with some beautiful architecture … and a lot of ‘Portes’ 🙂

Just in case you wondered… 7 weeks in, distance travelled so far by walking / cycling 1055.1 km