Who would have thought that we left Alicante and have now been back in the UK for two and a half weeks…. what a strange transition but Hattie is now back in her favourite place, in a field with lots of space to keep a healthy social distance from others…. !

After doing a final shop to ensure we had ample store cupboard food to get us through a couple of weeks worth of quarantine if necessary – family were on call for fresh food top ups! – we made sure everything was secure, did a last burst of cleaning …. and I managed to break the hinge on the bathroom cupboard door…. just what you need the day before you set off!  Thankfully we still had some wood filler (and time) to fix it again…. that’ll teach me to do the cleaning!

We set off from El Campello, Alicante at around 7:30am on Friday 29th May and despite the heat, had an excellent journey, arriving at Berriozar just after 5pm…. 9 hours driving and about 40 minutes worth of refuelling, driver change overs/pee stops and lunch!

After a warm welcome from the guy working at the garage, a quick refuel of both Diesel – the cheapest we have probably bought in about 30 years coming in at about 75 pence a litre – and LPG, we parked up at the Aire and found that we had it to ourselves… very unusual for a Friday night. It just goes to show that people were respecting the government advice in Spain and not travelling as much as they would normally have been… to a certain degree at least!

Bit by bit the road soon filled up with locals who were tending to their allotments which was really nice to see,  the odd motorhome also came and used the service point, looked at us quizingly, waved and disappeared off again. We had a very quiet night on our own, filled out our French forms for travel and even cooked up a kedgeree once the temperature had started to cool down!

Day 2 and the alarms were set for 6:30 and it was a stunningly beautiful morning to drive down from the mountains and cross into France – it was even a lovely temperature until about 8:30am!

We were fully expecting delays at the border but were pleasantly surprised as we were greeted by 5 police per toll booth – they had set up the border control just after you pass through – and they reviewed the forms, asked a few questions and sent us on our way with a smile… bonus!

As we weren’t sure what the situation would be for travelling through France and we were covering long distances in a short time scale, we decided to stick to toll roads.  It was an expensive option – the whole journey from the border through to the tunnel cost 250 euros in tolls – but it was easy travelling, avoiding any diversions and town centres and there were very few cars on the roads.

It was nice to see the odd French motorhome travelling – which at the time were only allowed to travel within 100km of their home – and then surprisingly to find two motorhomes already parked up at the Aire we had chosen for our overnight stop.

It was a lucky little find as we weren’t sure if we were going to be allowed to come off of the toll roads … even luckier as it only had three spaces – we squeezed in the middle! Located in Vouvray on the Loire which is just east of Tours (GPS n 47.409 e 0.796723).

With the temperature still up in the 30’s we opened everything up, baked some rolls for sandwiches, cooked dinner and settled down to a glass of wine and another quiet night.

Day 3 and we both woke even earlier than the last couple of days so decided to get up and get on the road … it was going to be a long day whichever way we look at it!

Once again it was a beautiful morning and we had managed to pass Le Mans by 8am as the roads were dead…. the additional beauty of travelling on a Sunday!

We had booked on the 18:30 eurotunnel train but by 8am I had changed it to the 17:30, then later in the morning I changed it again to 15:30 as we were making such good progress.  We actually got to the Eurotunnel at 13:40 and after a bit of a chug through passport control as they were going through a Polish van with a fine tooth comb, then a full look through the motorhome – inside and out – we were on the 14:20 train on our way to Folkestone.  It’s amazing how efficient they were – couldn’t fault the service at all.

After a quick stop at Tesco’s to refuel and being distracted by a plane landing at Heathrow – haven’t seen any in months! – we were parked up in the sunshine by 16:30 thinking about a beer and gin and tonic…. a long day but we couldn’t have asked for it to have gone more smoothly…. 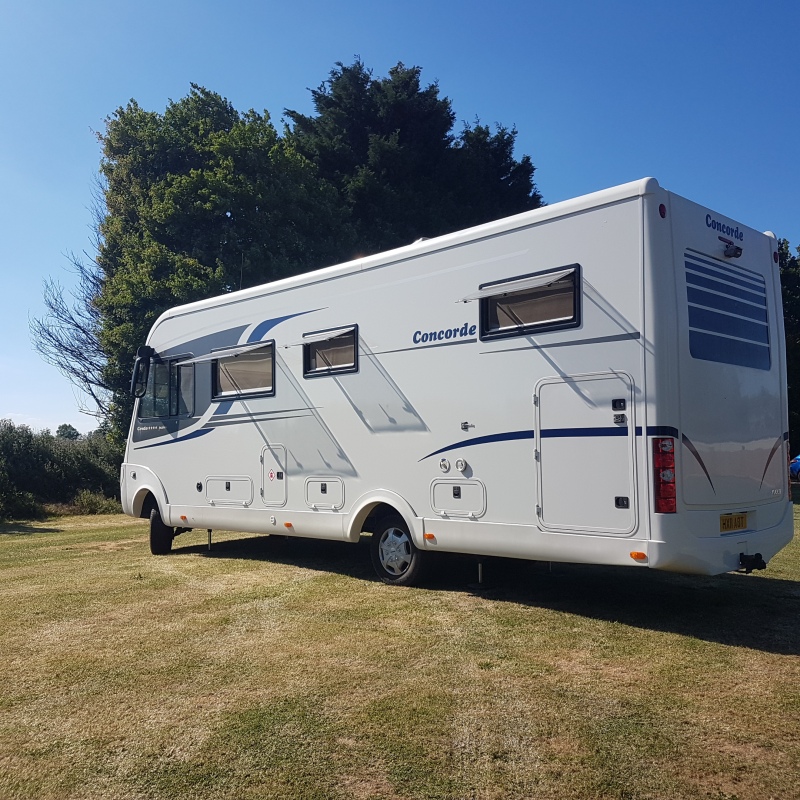 It was lovely to wake to birdsong and a cooler temperature to what we have got used to over the past few weeks, although a little strange getting back into the rhythm of normality – the legs didn’t particularly want to go for a run on Monday morning having not really even walked for three days.

After breakfast, on Monday morning we walked over to Keith’s mums to pick up the car and found ourselves doing an impromptu supermarket visit and having a picnic on her front lawn – can’t beat a baguette, slab of cheddar and a pot of coleslaw – whilst waiting for the breakdown services to come out….. embarrassingly a flat battery but from the sound we thought it was the starter motor so didn’t even think about trying to jump start it!

It was all good though and my mum even got an impromptu visit as we decided to take the car for a little run … win, win!

We haven’t eaten any meat for the last three months which hasn’t been specifically planned, just the food that we have cooked and fancied has been mostly vegetarian or vegan.  However knowing that we were coming back to the UK, we both fancied a good bacon buttie and oddly, we fell upon ‘Sausages’ and ‘Bacon’ whilst out for a walk! I think they must be someones pets so we held back, however it was very kind of Paul and Carly to bring us round some delicious smoked back bacon from the farm shop ….. just don’t tell the pigs!

We had been keeping ourselves to ourselves for a the first couple of weeks even though we weren’t required to quarantine but we were doing the supermarket shop. The first couple of visits to the supermarket were a little odd, just getting used to no face masks, gloves or handwash but it was good to see that most people kept their distance and respected each others space…. it was the ones with the masks who seemed to be the worst!

This last week we have started to see a few more people and found it really strange to actually be socialising with others after so long.  We even managed to have a BBQ in my brothers garden on Sunday as with my mum we were 6 – It was lovely!

It has been lovely to get back in time to make the most of some of the incredible seasonal fruit that we have in the UK…. in the last two weeks we have had Rhubarb from Keiths mums garden and we found some gooseberries in Waitrose – yum!

Cooking new things has been a little limited simply because we were working our way through the storecupboard and freezer bits that we bought and made in case of quarantine,  although we have managed to squeeze a few new recipes in as follows:- 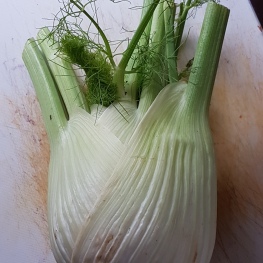 Keith bought a new toy (Bamix) to replace the broken manual mixer and the old electric hand mixer we had which is amazingly quick and efficient.   So far it has been tried and tested on a few things, although todays expirement on whisking up chickpea meringues went a bit wrong… and the cooking was even more of a disaster – I think we may need to remove the oven and fridge for the clean up effort! 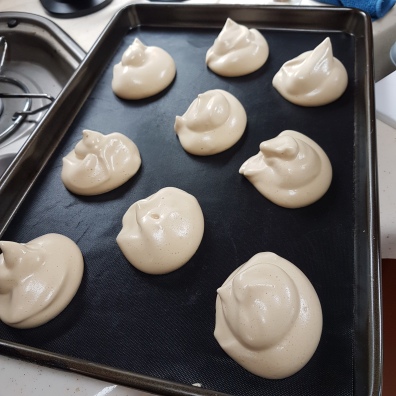 We have also found ourselves a new friend…. he is a little owl – yes, that is his name, but he is also only about 5 inches tall – and he seems to come visiting early evening.  The other day I managed to get a photo, although he was about 35m away hence it isn’t very good.  After which though he came closer to the motorhome and stood about 5m away looking in the door, went up on his tip toes, tilted his head a little … very cute!