So in my last blog I said that we had bought ourselves an expensive little treat but I didn’t elaborate … well the treat was an overnight trip on a little boat on the Doubtful Sounds which to many of you probably means absolutely nothing so I can only apologise yet again for the influx of photos.

Doubtful Sounds is the lesser known area of Fjordland in the South West of New Zealand, coming in second to Milford Sounds which is smaller and far more accessible as you can get in and out by road so lots of people opt for a day trip leading to it now being New Zealands top tourist destination.  Doubtful Sounds is roughly 200km south of Milford Sounds but you need to take a bus, then a ferry over a lake for 50 minutes and then drive on New Zealands most expensive road for another 50 minutes to get to Deep Cove which is the closest edge of it…. the journey however is nothing in comparison to the sand flies ….. we have never seen so many, you really need to be dedicated to want to come this far!

Seriously, that isn’t the case – it just takes more time to get to and there are far fewer boats that go out which makes it a much more tranquil area and although it is far larger than Milford Sounds, they say that Milford is more dramatic as it is narrower with steeper hills/mountains that come down to the water…. we still opted for the more tranquil option!

So, we left Wanaka and as we had to be ready for our little trip at 8:30am on Saturday morning we figured we needed to get to Te Anau on Friday night so we planned to take the Highway 6 over to Queenstown and then work our way down afterwards.  There came the first issue, although it wasn’t really a problem – we took the wrong road, which took us up through the valley then over the top before descending down into Queenstown…. well worth the mistake!  Although it was overcast and low cloud the route via Cardrona Alpine Resort was stunning.  The road was lined with beautiful blue and purple flowers – sorry, nowhere to stop to take photos – before we climbed and then dropped quite dramatically before arriving at Queenstown.

We stopped just at the bottom of our descent for a walk around Hayes Lake which was roughly 8km to stretch our legs.  Thankfully the rain held off until just after we stopped for lunch but it did give us a little shower on the the way back to the motorhome.

The rest of the route was pretty good and we arrived at Te Anau late afternoon and parked up at the NZMCA before heading into town for a look around and to pick up some more information to do some reading up on the next part of the South Island we are about to explore.

Bags packed and rain falling we were up early to ensure that we didn’t miss our pick up by Fiordland Cruises to start our overnight trip on ‘The Southern Secret’.

After a bit of an ominous start (the minibus broke down) and the weather on the ferry looking pretty dull, we arrived at the other side to be met by sunshine and sandflies …. I think we actually preferred the low cloud and grey skies …. seriously, they were that bad!

We made it though and by the time we got to the boat itself we were peeling off the layers and we had managed to shake off most of the sandflies so we were happy. 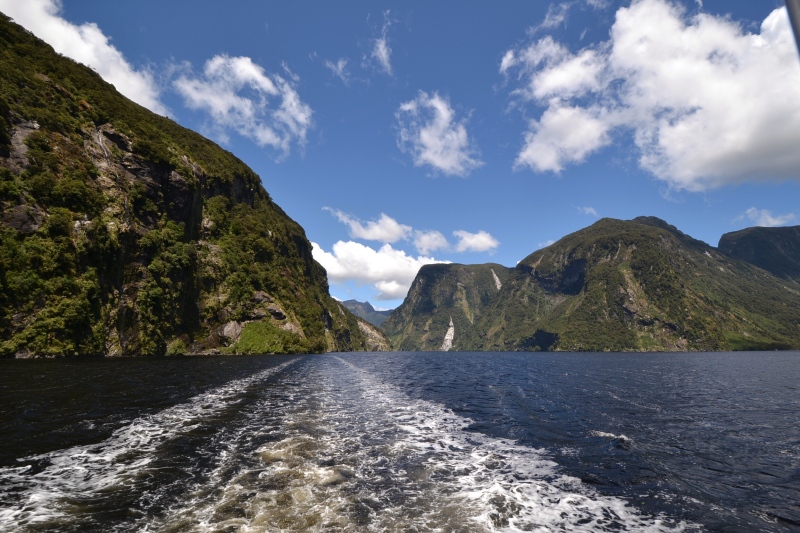 The boat took a maximum of twelve guests and we were eleven plus two crew.  An American family of four (the children were 13 and 16) who were really nice, both parents worked in medical research for Malaria and HIV working for the US embassy currently living in Bangkok, A Kiwi girl with her Australian boyfriend who live south of Perth who were both winemakers and a retired husband and wife who do house swapping from the US with the wife’s sister – all really friendly.

We had a double en-suite which was perfect for what we needed and the lounge area  was light and welcoming so we soon settled into the rhythm of things and lunch was served.

We were presented with a beautiful buffet of salads, fresh bread and lots of fresh crayfish that they had caught on the previous trip.  Keith hadn’t ever had Crayfish and it is fair to say that we didn’t let any go to waste.  It was so fresh and light … just delicious – although it was obvious that food wasn’t going to be an issue on the trip.  No sooner had we finished lunch, cake and fruit appeared …. then later in the afternoon a fantastic cheeseboard…. 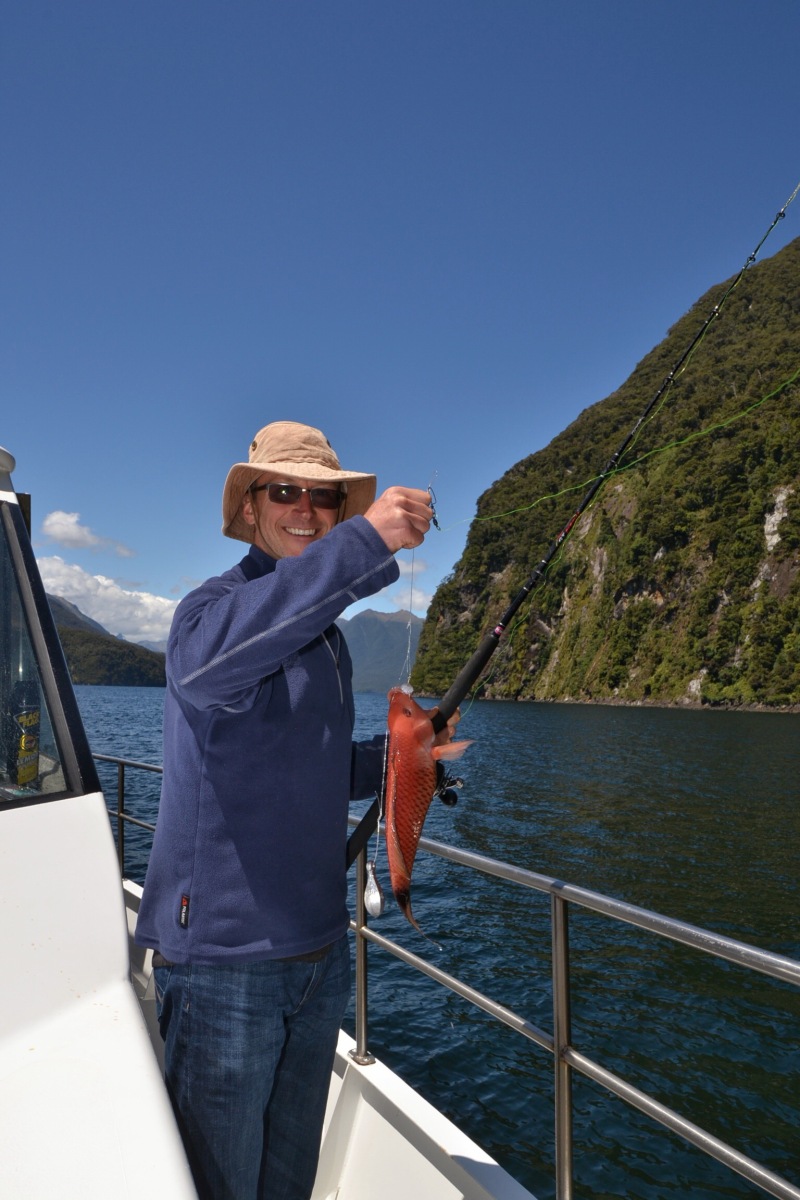 We cruised into and out of different arms of the sounds and stopped to do some fishing on several occasions.  On the first stop Keith caught a couple of fish and I caught one – all were thrown back in as they were at the bottom end of the pecking order and apparently a bit mushy when cooked.  The second stop was a little better and some Blue Cod and Sea Perch were caught… most of which were keepers, the third had larger blue cod (not caught by either of us) and a 4 ft Shark…. which again got thrown back in.  Regulation is really tight regarding what you can and can’t fish both on quantity and size, we did however between us manage to get enough for dinner thankfully!

We pulled into a nice quiet Bay Area where we anchored down and we were able to go kayaking, swim or do more fishing if we wanted to.  So, we went kayaking round the island and over to a waterfall and then once we were back on the boat did a quick dive in to the water for a swim.  It was fresh to say the least but so clear and although the photo doesn’t show it, very calm…. needless to say we went swimming before we had caught the shark!!

After a quick shower to warm up we did a bit more fishing and we started to move on again to explore a bit more.

We found Bottle Nosed Dolphins that were huge in comparison to the Dusky Dolphins that we saw in Kaikoura.  They were playful but not quite as ‘showy’ as the duskies … mainly swimming along in front of the bow of the boat – impressive none the less.

We also came accross a blue eyed penguin who was having some chill out time …. we never realised how solitary they are, happily swimming around paying no attention to anything that is going on around them.  We had already been told that we weren’t likely to see the blue eyed penguins as the mating season is over so they have all disappeared back out to sea, we were happy though and hopefully when we get further round the coast I will actually get a decent photo that I can share as they are so small, I haven’t managed to get close enough despite my zoom lens!

A little further on and we stopped to pick up the Crayfish pot which was full.  Out of about 15 that were in the pot we kept 11 which was pretty good, the others were too small.  So although several were tomorrows lunch for the next group, we got Crayfish Cerviche and Crayfish Sashimi to go with our dinner which was amazing!

Dinner was pulled together by Kerstin who was a natural at everything she turned her hand at … she could certainly cook for us any time as she produced a banquet for us.  Unsurprisingly,  we ate a bit of everything and there was something for everyone … chicken, lamb, salads, fish cooked in two different ways as well as the Cerviche and Sashimi – all followed up by a fruit crumble.

We stayed up chatting to Jason (the Skipper) and Kerstin and watched the sun go down as it was the summer solstice as well as a full moon … so tranquil and beautiful.  It was a clear night so the stars and moon were amazing but it did go down to about 6 degrees so it was a little fresh to say the least in the morning.

As with any boat it doesn’t matter how lovely it is, sound insulation isn’t the best and the son of the family in the room next to us slipped as he was getting out of bed during the night whilst getting up to go to the bathroom … funny, although it did feel like he was actually in our bedroom!

Unable to sleep we were up early and went up on deck to watch the scenery unveil around us – spectacular… especially whilst no-one else was around.

Everyone else slowly started to emerge to get some caffeine around 7:15/7:30 and after breakfast we started to move on back to the quay … an amazing morning weather wise. 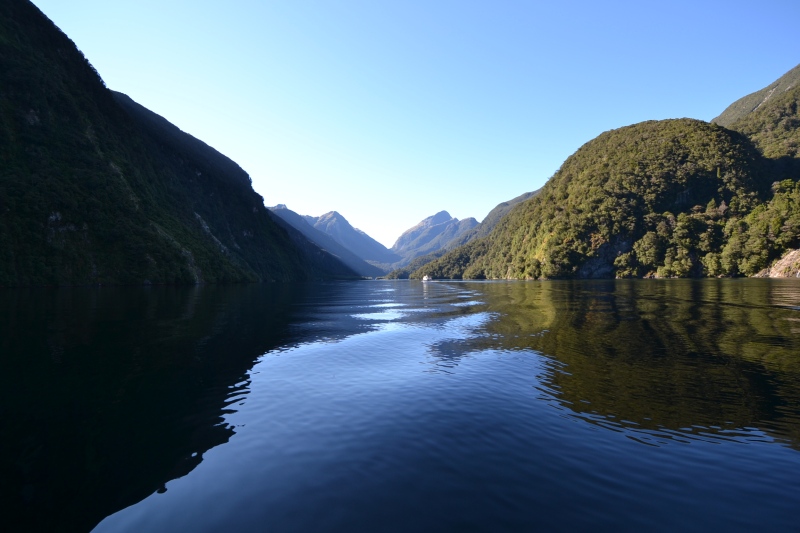 The trip was spectacular and we arrived back at the motorhome just before lunch, still feeling the cold as we hadn’t quite had enough time to warm up despite the sun shining back in Te Anau.  After lunch we did our Christmas haircut and then headed in to Te Anau to do the Christmas shopping which felt a bit weird.

Before heading out on the boat we had decided to stay in Te Anau for Christmas, leaving on the 26th as it is a nice site and there are several really nice walks to do linked with the Kepler Track.  So on Monday morning, as we were all stocked up and emptied/filled we headed off on a lovely 23km walk on the opposite river bank to the Kepler Track to return back to Ava to be invited to drinks along with all the other campers – a nice surprise before we set into our BBQ,  enjoying our burgers and bacon – yuummm… a nice way to ease into Christmas!

We were woken on Christmas Day by some Oyster Catchers (they are birds just in case you didn’t know…..) at about 5am, obviously on their way back from a heavy night out.  The sun was shining and it promised to be a corker so we got our morning exercise out of the way and once breakfasted, headed off to do the right hand arm of the Kepler Track which was in the forest along the side of the lake.  A lovely  undulating 25km walk – not too bad apart from the sand flies who appeared to want to join us at lunchtime.

Back at the motorhome we joined the others for a couple of Christmas drinks before cooking steak on the bar b q for dinner …. we do miss Turkey (or at least I do) but it was very good steak!!

Merry Christmas everyone – Enjoy, whatever you get up to, wherever you are!