After a hilly run (me) and lots of strange looks (Keith, whilst doing his exercises) we set off on our way further into sunny Scotland. I don’t like to be critical,  but it was a bit of a ‘caravan’ site and you could almost see the neighbours looking on and complaining about us doing press ups….. obviously too noisily!! – just didn’t quite have that ‘lovely’ feeling that so many of the other places we have stopped in have had.

Not having booked or planned much for this trip, we did a last minute bit of calling ahead and found that the beautiful campsite that we had earmarked for a couple of nights and a mass laundry session was full …. 120 places at the beginning of May???? not by midges, but possibly worse…. a six day motorcross event, so with only a couple of pairs of knickers (being a boy, Keith had plenty of boxers!) left we set off towards Fort William in search of a launderette. 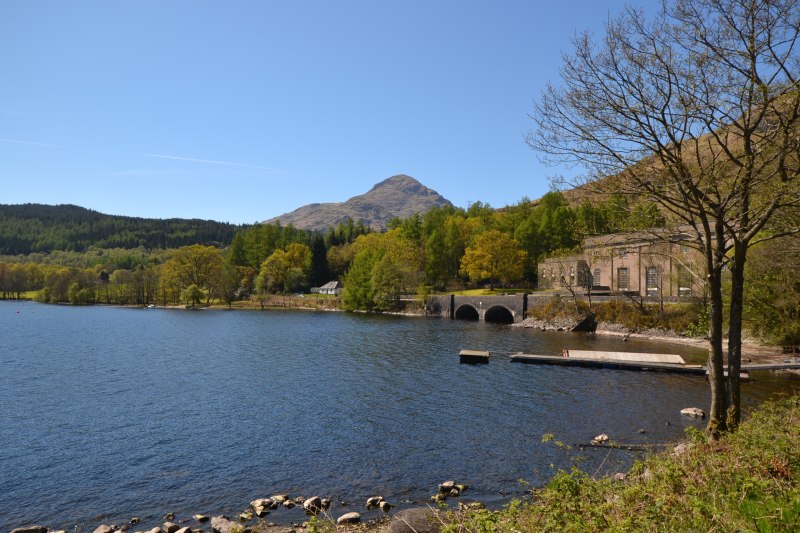 En-route we stopped briefly at the top end of Loch Lomand for lunch and whilst I was playing chicken with artic trucks, Keith found another campsite which looked fairly interesting a little further north so we pushed on.  Despite some of the roads being a little on the narrow side, the journey was beautiful going from almost lunar landscape potted with small lochs, to a yellow/green water colour valley glancing up at snow capped mountains and then finally thick pine forest … not bad at all.

We finally arrived at the Faichemard Farm campsite (Faichemard Farm, Invergarry, Inverness-shire, PH35 4HG £16 +£2.50 if you want Electricity)  by following a windy road up into an opening in the forest – a stunningly tranquil location for us to hang out our washing and have our first Bar B Q of the year!!

The following morning the sun was shining and there were bright blue skies so we managed to get two large loads of washing done and do two very different but lovely walks, one through the moon-like landscape finally arriving at a loch, the other with a fierce, fast running river through a dense forest.

On Friday morning we woke with bright blue skies again (although a chill in the air) and we both set off in different directions for a run. I think Keith thought that his was going to be slightly less hilly than mine but it turned out that he got the short straw….. trail, shuttles due to gates AND more ascent/descent …. at least mine was mostly on tarmac and slightly less wearing!

Showered and breakfasted and ready to take on the day, we set off to Skye, working our way round several Lochs before we parked up at Sligachan Camping (£15 for two people + £5 if you want Electricity which we didn’t), which is just at the bottom of Spurr nan Gillean. (A nice sized peak in case your were wondering!). It is a basic site with fantastic showers and friendly wardens owned by the hotel/brewery/pub/restaurant just across the road.

As the field around started to get covered in tents, we set off for a little stroll towards the fairy pools. We didn’t quite make it as we realised that it was further than we thought but had a lovely 3hr walk and certainly had all the cobwebs blown away! 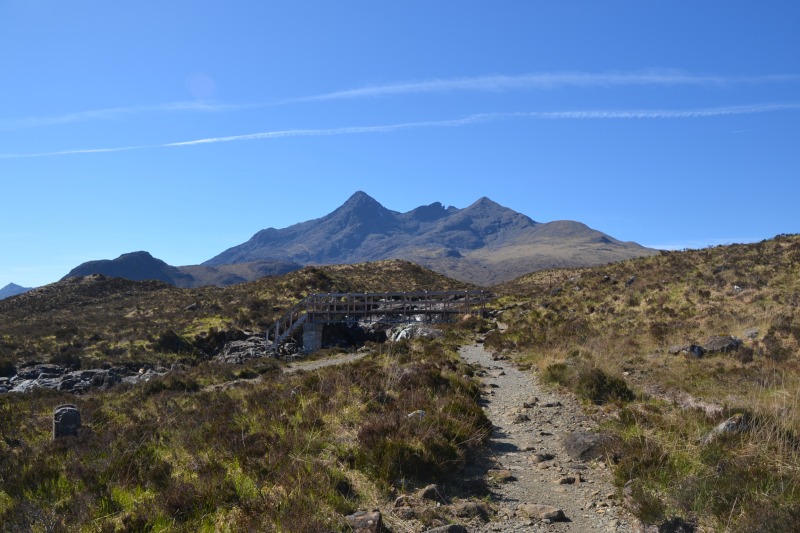 With dinner prepped and rolls on their second prove we popped over to the pub to sample some local produce …. gin and beer! …..Thank you James – great suggestion!!

The following morning, after a wind swept set of exercises amongst fellow campers looking on like we had actually gone mad we set off up Spurr nan Gillean for a little stroll.

The first part was pretty easy but unfortunately the last 25% was more bouldering than walking and the last 5% of which was a scramble on steep scree …. not much fun when you are quite a long way up. Needless to say halfway up this last part of scree we gave up, ate our sandwiches with a beautiful view and started the slow descent back down to enjoy the rest of the evening watching the sun go down and the light changing on the hills around us.

We woke to a slightly different picture on Sunday, unable to view the top half of the Spurr nan Gillean as it was covered in cloud. The skies were blue but the winds were high and we felt quite glad we did the walk the day before rather than Sunday.

After breakfast we set off on a road trip round Skye, passing through Dunvegan to take a quick peak at the Clan Macleod castle before passing round the northern coastal road to arrive at Staffin where we would stop for the night (Staffin Camping, Staffin, IV51 9JX £16 without Electricity).

If you didn’t know it, you could mistake Staffin for a little Cornish bay as it is very similar with beautiful crashing waves on a rocky coastline. We set off for a walk from the campsite over the cliff and down onto the seafront which was hard work to say the least as the gusts of wind must have been 40+mph but worth the views despite being a little too misty to take any decent photos.

As the evening went on the winds got stronger…… we were going to be in for a long one.

This morning thankfully most of the winds had died down leaving it pretty tranquil by 10:30 when we were ready for the off. So, with blue skies and rolling rocky hills/mountains water coloured into the backdrop we weaved our way along the road to make our way back to the mainland, smiling briefly as we passed a local farmer in search of any mischievous sheep escapees to put in the back of his track and return to the field.

We passed through Portree which is a beautifully picturesque town in a bay and promised that we would be back again to explore Skye further, next time armed with OS maps so we can do some more walking!

Back on the mainland we started the trip around the coast along what is now called the NC500….supposedly now one of the most beautiful drives in the world. We wiggled our way up the coast through the narrow roads to arrive at Shieldaig our little wild camping spot (GPS +57,525209 -5,648208) for the night looking out over a beautiful bay.

Oh, and just in case….. I have been updating the map in case you were wondering where we were.  Just go and have a look at the map