Needless to say that the only knock on the door that we got whilst in Fisterra was from a little old lady asking us if we wanted to buy some fish 🙂 Unable to use the bar-b-q or having any external washing facilities on the ‘Aires’, I politely declined as it is bad enough having to deal with the smell of cooking a tuna or swordfish steak in the motorhome, let along filleting and cooking a whole hake – as lovely as the idea was.

In the morning we took advantage of the fact the sun was still shining, heading for a walk around the bay which was incredibly tranquil. We then set off along a coastal road stopping for a walk and lunch in Muros which is a pretty fishing village, and then on to Boiro where we had planned to stop for the night (or possibly two).

There are two ‘Aires’ in Boiro, one is right on the seafront in the town which despite the reviews looked really nice, and the other is 4km from the center of the town on a beach and felt like it was in the middle of nowhere. We decided to opt for the more remote option where the actual ‘Aire’ was pretty overgrown and the road leading up to it a dirt track, 50 meters down the road however was the beach, where we parked up nose almost touching the sand, roughly 5 meters away from the gently lapping water. Idyllic…..

As it was such a tranquil location we decided we would stay a second night and head out to try and find somewhere nice to try some local Gallician food for lunch. After a long walk and at the point of giving up, we stopped for a drink in a place by the river called Don Paquito. The bar was heaving with locals drinking a glass of wine or beer and eating tapas, so we decided it must be worth a try. Half way through the glass of wine and having studied the menu, we decided that although it was a bit pricey we would give it a go for lunch as a treat. Taking a table upstairs looking over the bar, we were surprised to be offered a ‘Menu del dia’ for 10 euros which contained a lovely mixture of fish, seafood and local stew – we left the restaurant just over two hours later feeling very contented having eaten monster mussels, half an enormous fish (me), Pork, bean, Chorizo, potato and cabbage stew (Keith), delicious deserts, a bottle of wine and coffees (one of which was Irish) for 20 euros between us …. The quality of the food and the friendliness of the staff made us decide to stay another night and go back the next day …. Fat and happy 🙂

It rained heavily all Thursday night and after a brief pause first thing on Friday morning (when we managed to do our tabata exercises on our rather idyllic ‘private’ beach)… it continued on and off throughout the morning. 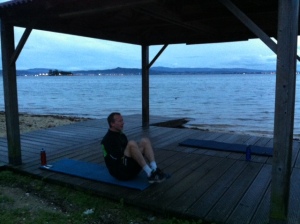 As I left the motorhome a little dog jumped up to say hello and as I am a softy when it comes to dogs and it was wearing a collar, I gave it a little stroke before looking round to see where its owner was … and couldn’t see anyone. Two hours and 7kms later the little black dog was still following (or better said ‘leading’) us. As much as we tried to get rid of it, worried that it would not know its way home the further we walked, it had decided that we were its new owners leading the way and looking over its shoulder at every turn to make sure we were still there – and when we weren’t he came running back after us to find us. If we had tried to train a dog to be as obedient we wouldn’t have managed it. As we got into the town I was getting more concerned about the dog getting run over, as although it was pretty traffic aware, there were odd occasions where it strayed into the road.  Thankfully we found a vet and they took him in and said that they would place him in a kennels whilst looking for his owners. The poor thing was wet and hungry but as much as I love dogs …. we don’t need one in the motorhome at the moment!  Relieved of responsibility, we took cover in the restaurant and filled our tummies on more lovely food – definitely worth a visit if you are in the area.

After another ‘fresh’ run and beautiful sun rise we set off on our way to Pontevedra rather boringly to do some washing. It sounds daft, but we have been pleasantly surprised by the shiny new launderettes that Spain has – it is just unfortunate that they are only located in a few of the larger cities. Upon arriving at the rather sparse and ‘rugged’ Aire I confess to having been a little nervous about leaving the motorhome as it was basically a plot of land surrounded by derelict buildings, but it ended up being our home for two nights and apart from featuring as one of the top dog pooping spots, it was quite tranquil, not too far from the centre, and right next to the river. Despite agreeing to only stay one night, on Sunday we decided to walk inland along the river and we were pleasantly surprised by the beautiful forest filled with Eucalyptus trees and waterfalls, we walked about 9km inland before turning back – and it was well worth it… dare I say it, more attractive than the town itself, although the old town was full of beautiful old buildings and character.

After changing our plans yet again we set off this morning to a Bodega (vineyard) on the Portuguese border just near La Guardia. The bodega is called Valminor Ebano and they mainly grow white grapes in this region, so we tried three of their best white wines in addition to a red – all of which were very nice. We bought 5 bottles of the red and one of the white to test my tolerance levels and headed to the car park for our ‘last supper’ (for a while anyway) in Spain which is where we are staying tonight.

Supper tonight was a hand-picked selection of different meats and cheeses from the market this morning along with some artisanal bread and a slice of ‘Empanada’, better known to you and I as chicken and chorizo pie …. washed down with some red wine and finished off with some Turon (local nougat) – can’t think of a better way to say goodbye to Spain 🙂

So finally tomorrow we will see what Portugal brings – neither Keith or I have ever been, so this will be a completely new experience for us.