After visiting Haro Keith thought it might be nice to come and see Bourges as it was one of the main towns on the route to Santiago del Compestello … so we headed off towards it. We stopped along the way at Santa Domingo de la Calzada which is a walled town on the pilgrimage trail and unsurprisingly has a beautiful monestry and church…. I feel a bit of repetition coming on over the next few days/weeks!

We got to the campsite (Fuentes Blancas – 16 euros a night all inclusive) just outside Bourges mid-afternoon and struggled to get in the entrance as there were so many people trying to get parked to go into the bar/restaurant which was part of the campsite and is right in the middle of a national park. After a bit of wiggling, we parked up and went for a walk through the park, admiring the Spanish in their Sunday attire despite the 25/26 degree heat.

Monday morning I set out for a run round the park and not only was I surprised by the cold … it took me 3km’s to get any kind of warmth into my hands…. But also by the quantity of people out for a morning walk. Not wishing to be age-ist, but at one point I felt like the entire retired population of Bourges was walking towards me – I felt quite threatened 🙂

We then set off for a walk into Bourges itself and as the sun broke through the clouds it started to warm up and show us what a beautiful city it is. 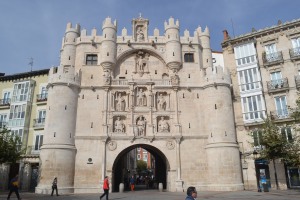 The Cathedral is gothic in its style and the detail is stunning, with certain parts looking a bit Sagrada Familiar-esque. 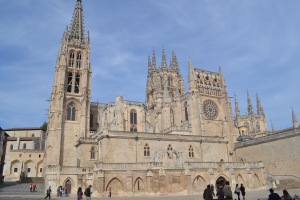 Following on from this mornings activity, we are a little concerned however about the habits of the pensioners in Bourges…. Whilst walking just outside the town centre a little old lady came up to me and quietly asked me if I liked Jam. She explained she only had one jar, but if I wanted it, I could have it for 1.50 euros. I am not sure if there is an underground cult in Bourges using the pensioners to pedal ‘Jam’ … or whether she really was sincere and wanted to sell me a jar for 1.50 euros. I politely declined …. So we will never know, although part of me really wants to go back tomorrow to find out if she is still there trying to offload the same pot onto someone else 🙂

We set off from the campsite just before mid-day (we are just trying to balance it out for all the people who decide to get up and leave at 8am…) and headed in the direction of yet another area of Spain that produces wine ….. we are spoilt 🙂

The area is situated in Castillo de Leon – just East of Vallodolid and it is between 800m and 1000m. The vines, like Rioja have a beautiful red tinge to them differentiating them from the green leaves we saw in France making them look very autumnal…if I can get a decent photo I will post it up.

We had selected another small independent vineyard from the Espana Discovery book – Bodegas Vallarin – and this time we weren’t disappointed. Despite arriving during lunch time (15:30) the owner accepted us in, talked us through the wines they sold and we bought another 6 bottles (two of each of three different varieties) of varying price and level…. This is going to be an interesting tasting session! She was incredibly friendly and chuffed that we had chosen to visit their vinyard and said that we were more than welcome to stay and she also pointed us towards a trail/cycle path which stretches for 39km along the river.

Unfortunately this bodega doesn’t export as they are quite small…. But once we have had a chance to try them properly I will add them to the blog ….. just in case you are passing by 🙂